Do you remember this? When was the last time you saw one of these? Or are you too young to have known the weekly TV Guide. The TV Guide magazine and listings in our local newspapers was a weekly necessity in my home. There was no guide option on a remote control. But there was page after page of daily TV listings from morning to evening. And TV stations went off the air with the playing of the national anthem. 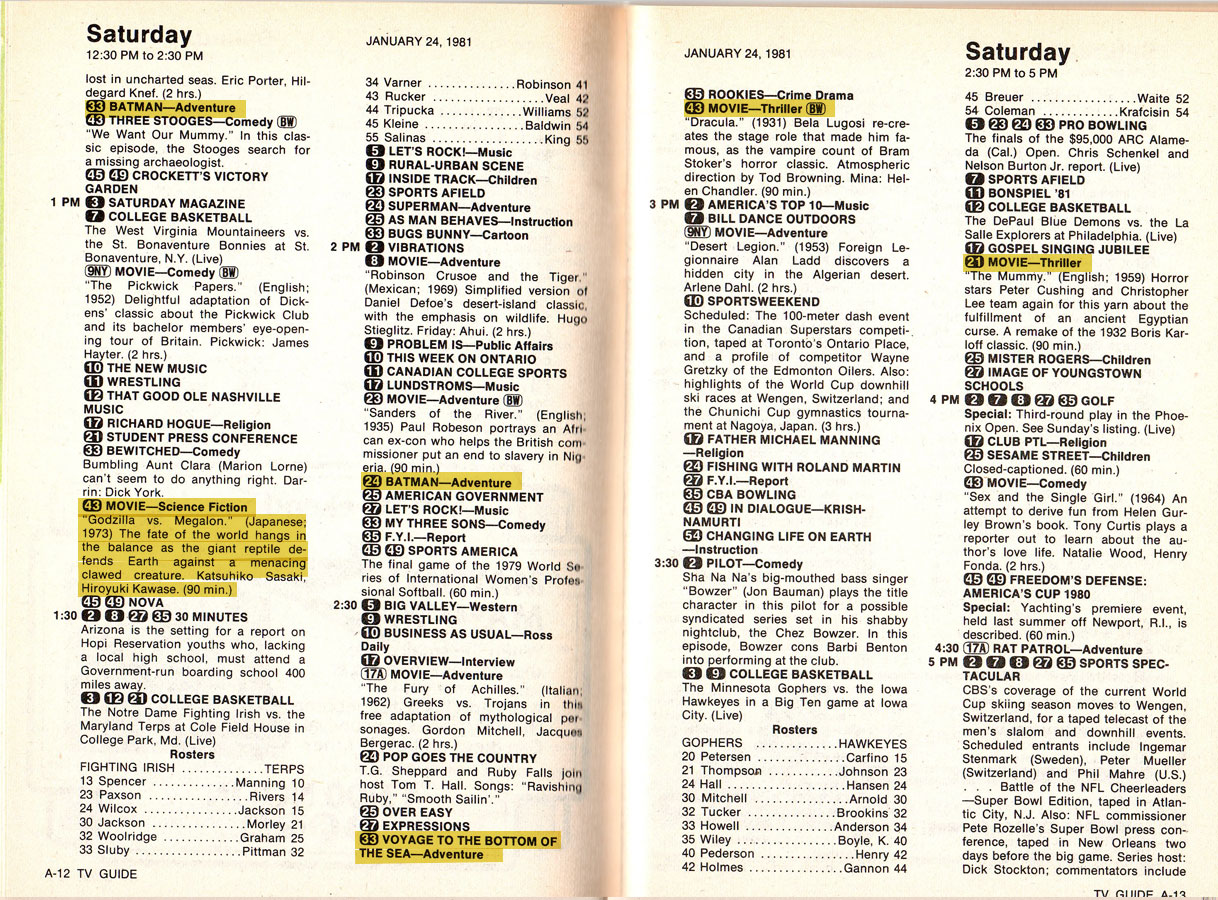 Growing Up G was all about frantically yet carefully through the weekly paperback TV Guide. First stop, the Saturday afternoon listing. And along the way you might see an ad for a Godzilla movie or marathon. This is one of my fondest memories growing up. 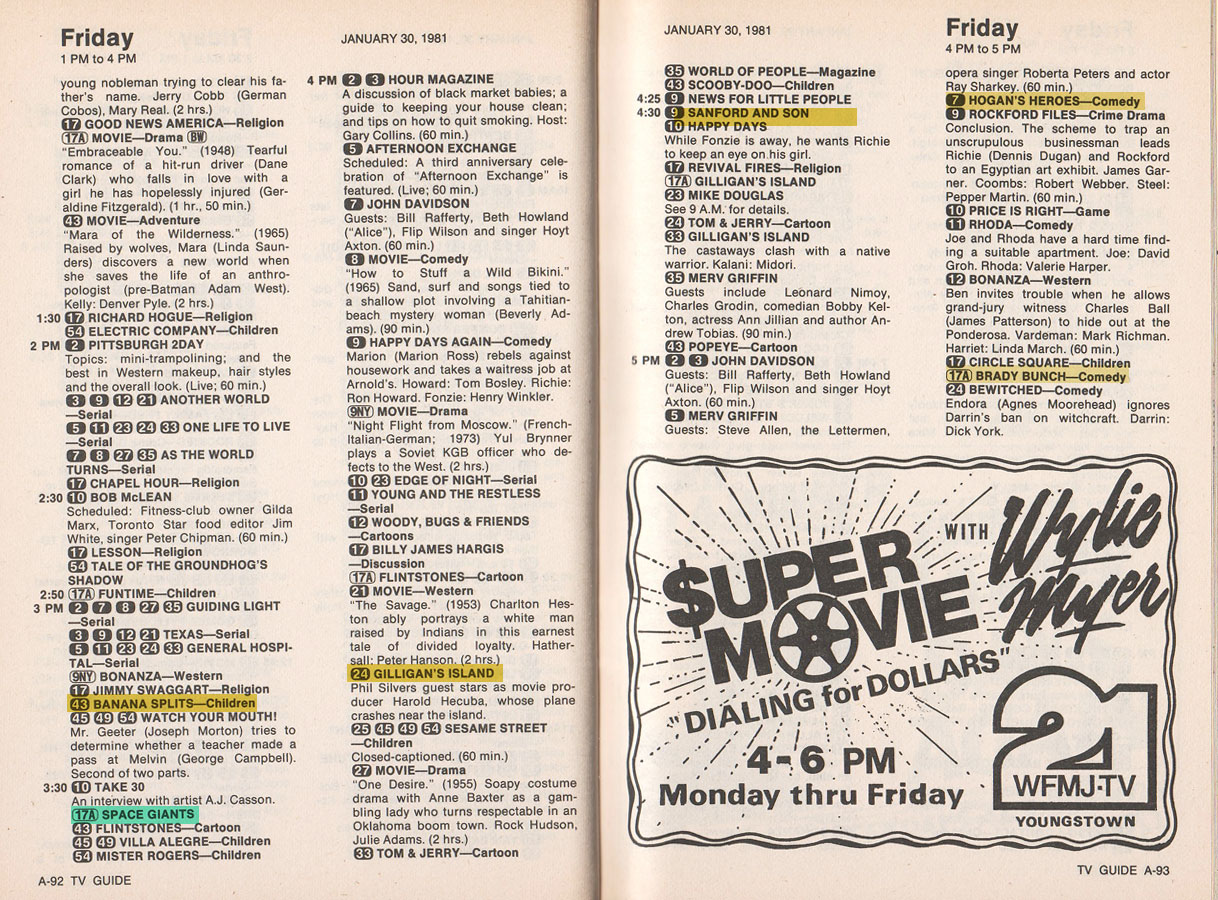 Philadelphia’s local UHF channels (17, 29, and 48) were known for showing Godzilla movies on Saturday. Creature Double Feature on Channel 48 was an institution. Godzilla was usually paired with horror movie. Sometimes there was a Godzilla double feature. Channel 29 has its Saturday afternoon movie and evening movie on All Night Long. All the bases were covered by these channels. Below is a sample of the Creature Double Feature opening. 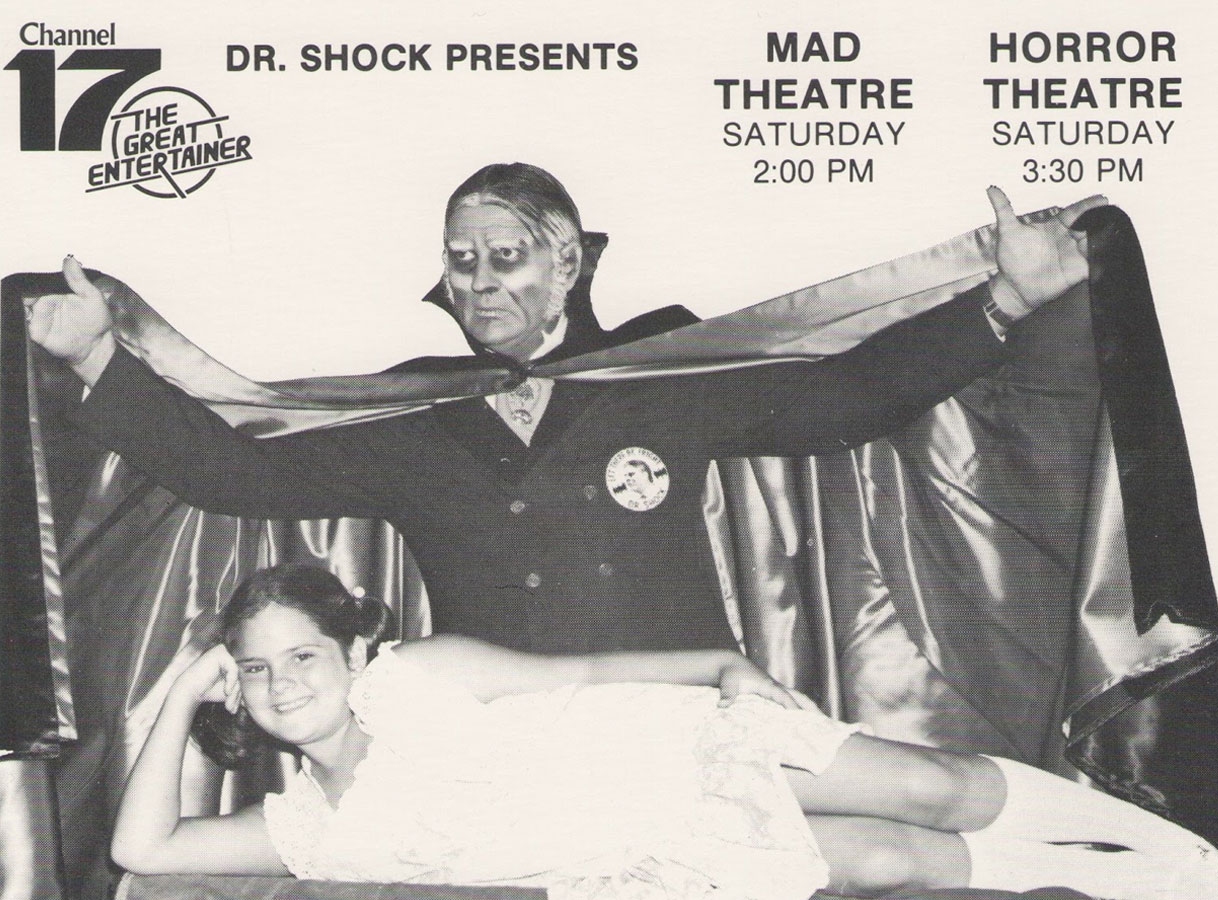 During the week, Wee Willie Webber kept all the kids attention with his cartoon show on Channel 17. It was on his show that I was introduced to Ultraman, The Space Giants, Johnny Sokko and His Flying Robot, Astro Boy, Speed Racer, Marine Boy, Gigantor, Eight Man, King Kong, Hercules, Underdog, Kimba the White Lion, and more.

In the 70s and 80s, Godzilla pictures were hard to come by. Every picture was precious. TV Guide was a good source. I remember clipping and tarring out ads. Here is a small collection of Godzilla TV Guide ads. 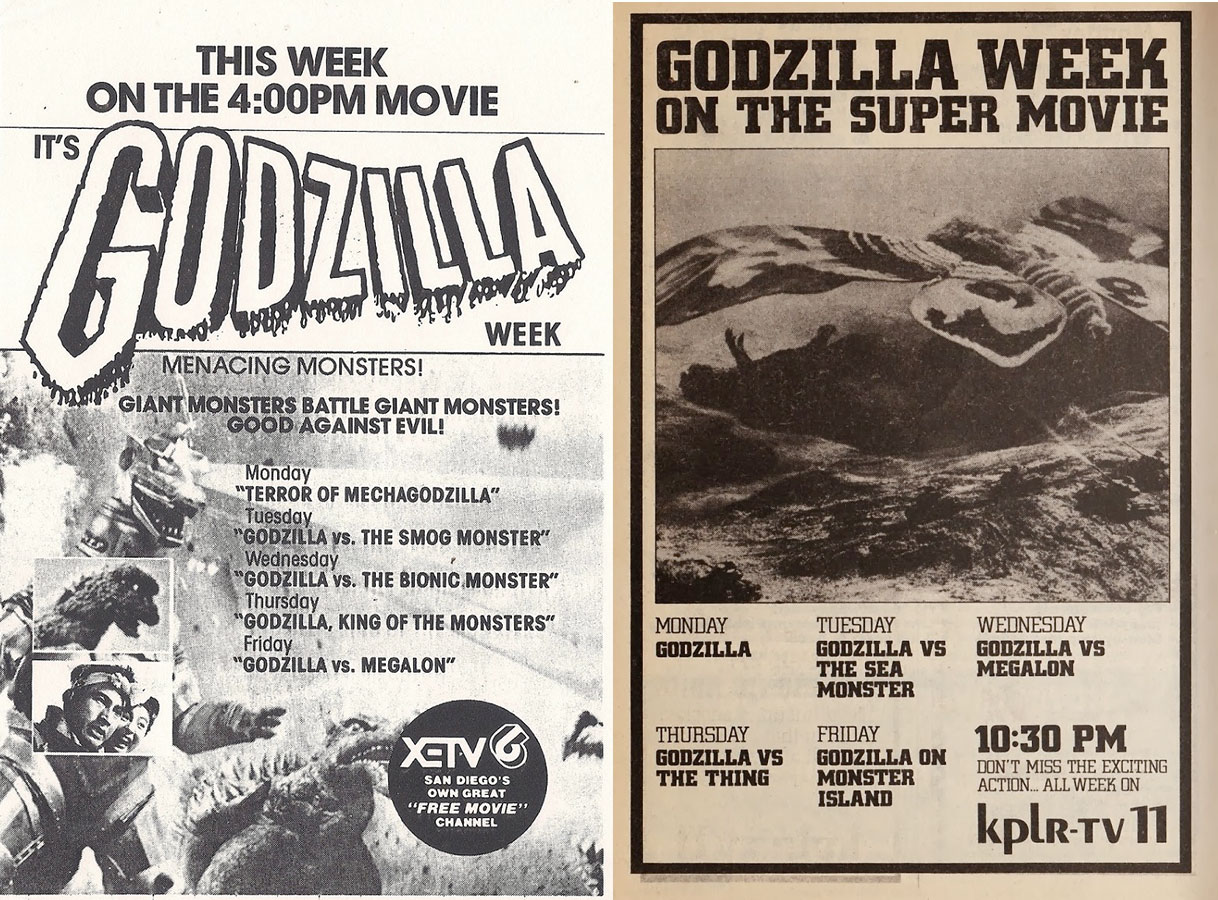 These TV Guide advertisements left indelible memories in kids all around the country. Japanese kaiju and American superheroes shaped our ideas about good and evil. 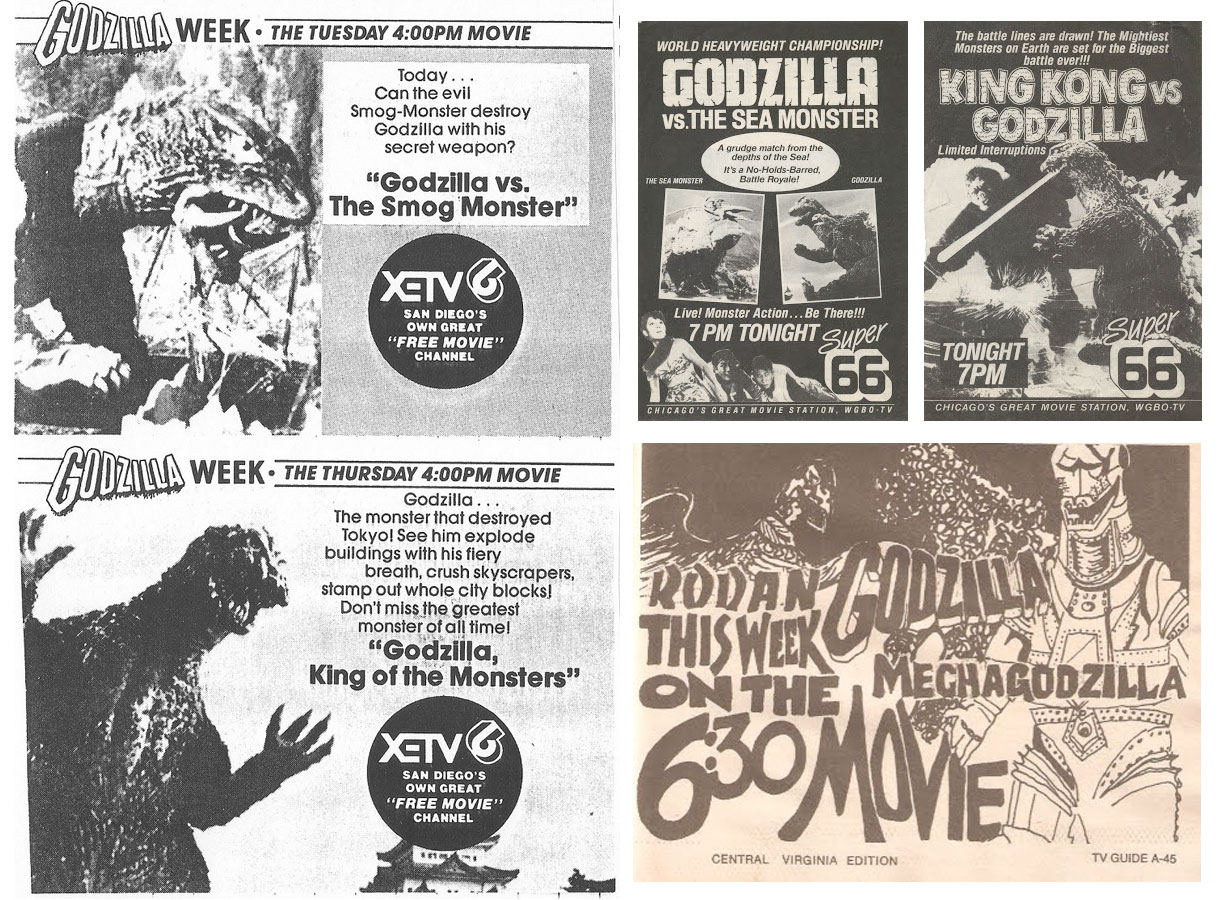 Some of my other favorite daily shows include Spiderman, Spectra Man, Battle of the Planets, Star Blazers, Super Friends, Tranzor Z, Voltron, Thunder Cats, and Robotech. On Saturday morning ABC aired The Land of the Lost, Mighty Orbots and Godzilla Power Hour was on NBC. Godzilla on the weekend was the climax and highlight of the week. 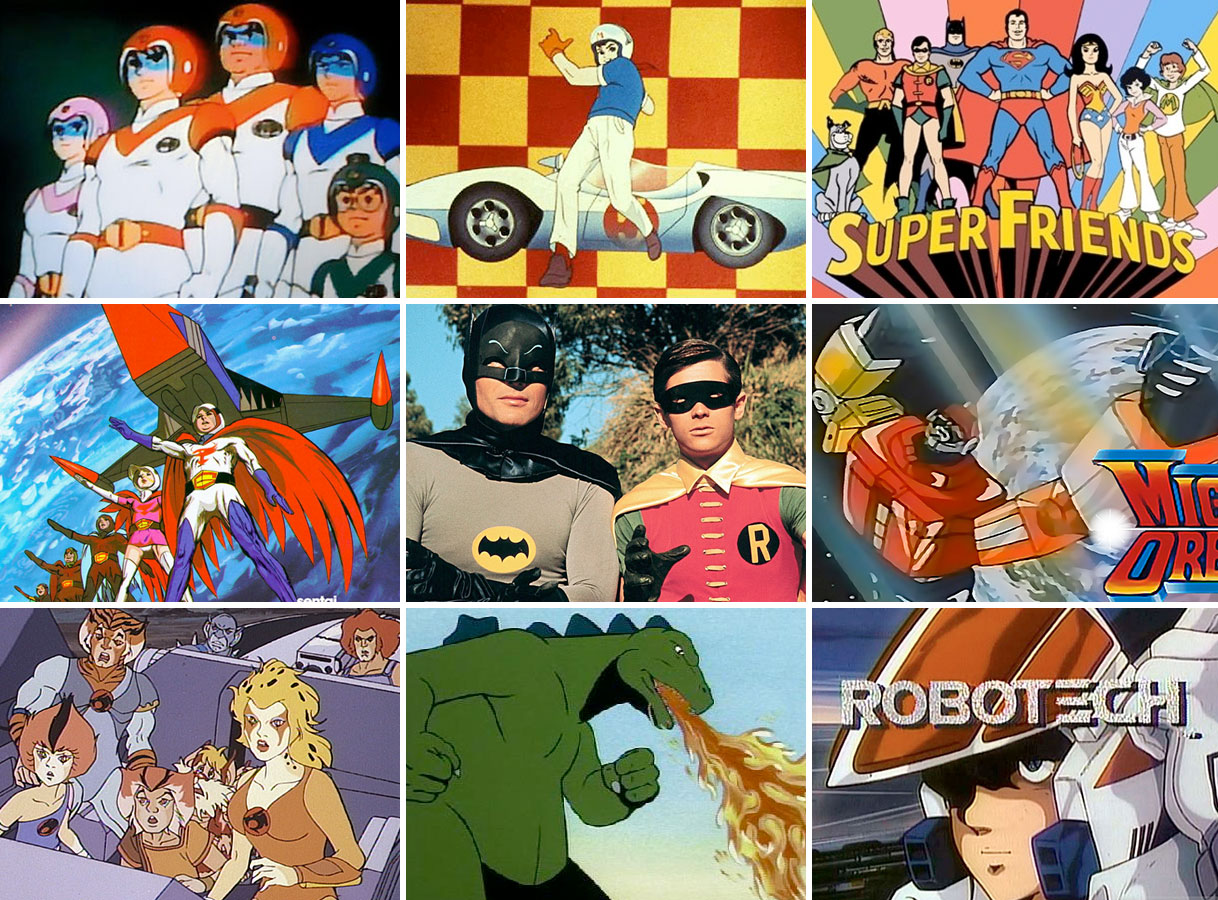 This blog entry would not end properly without a fitting closing. And there is no better closing than the end of the day sign off.

These were the best days of my childhood. Every TV Guide listing fills my thoughts with memories of Growing Up G.