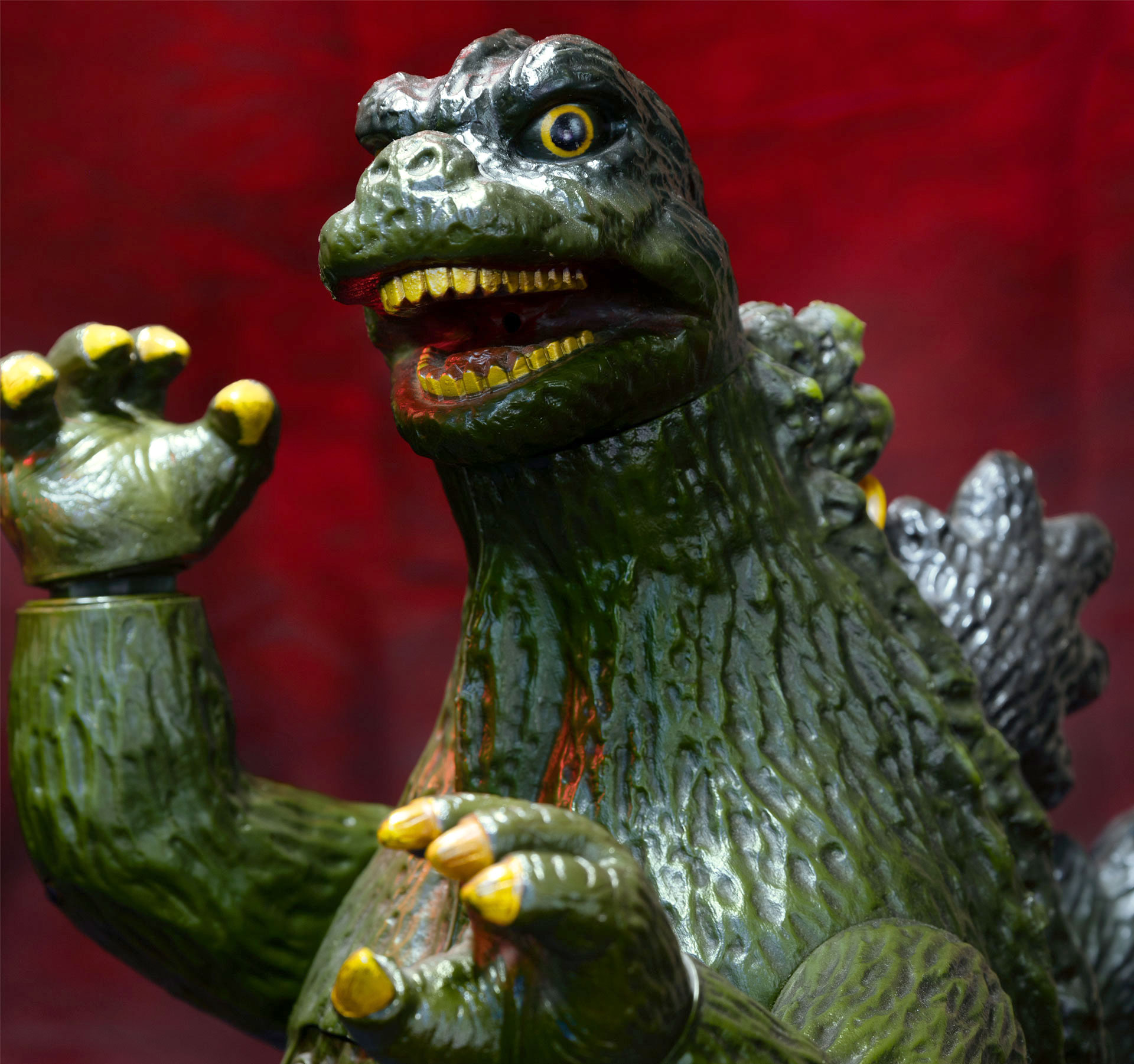 Meet the highly coveted and sought-after Popy Godzilla Jumbosaurus (ポピー ゴジラ ジャンボザウルス/ジャンボマシンダー) released in 1978. This rare vintage toy was part of the Godzilla boom in the 70s. That same year, Mattel released a similar version of Godzilla under the Shogun Warriors in the U.S. I vividly remember spotting the Mattel Godzilla at Kiddie City. It later showed up under my Christmas tree later that year. However, the Popy Godzilla had been only a dream since I first saw it sitting on Pee-Wee Herman’s bedroom window sill in Pee-wee’s Big Adventure (1985). This Godzilla has been so elusive and too expensive. But now, after years of looking, the Jumbosaurus is finally on my shelf.

The Popy Godzilla Jumbosaurus is a big toy with a height of 43 cm (17″x8″x18″). It’s only a bit smaller than Mattel’s Godzilla. It was probably one of the largest Godzilla toys released in the 70s. This toy is part of the Popy “Jumbo Machinder Series” (ジャンボマシンダーシリーズ). Jumbo Machinderis a character toy made primarily out of polyethylene and sometimes vinyl. This term become part of the standard vocabulary for toys with a similar style. Initial all the toys in the line were a standard 60 cm tall, but smaller toys called “junior machinders,” “super machinders,” and “carnival machinders” were also included.1 The first Jumbo Machinder was Mazinger Z, released in 1973. The success of this toy line led other companies to release their own. Mattel bought the rights to several Machinder toys, then retooled and released them in the 70s under the Shogun Warriors line.2

There is so much to love about the Jumbosaurus. It has plenty of gimmicks for kids to play. The toy is a more accurate representation of Godzilla than the Mattel version. Its head sculpt, big dorsal fins, and long tail leave no doubt that it is Godzilla unlike the Shogun with its smooth round head, small triangular fins, and short simple tail. In contrast to the Shogun, the Popy’s head swivels side to side with a friendly face like Godzilla in the 70s movies. The mouth is open with a simple red tongue. Rather than sporting a lever-action fiery tongue, Popy built-in a roaring/talking gimmick triggered by pulling a yellow (or blue) plastic hoop on a string found along the neck between dorsal fins. Godzilla’s roar screams out from a is a speaker inside its chest. Both machinders have a spring-loaded fist that fires into the air at the push of a small button located on the right arm. The legs of the Jumbosaurus are shorter than the Mattel toy, but both are supported by wheels under their feet.

Popy (ポピー) was a Japanese toy manufacturer in the 1970s and 80s. Bandai formed Popy in 1971 until 1983 when it was merged back into the parent company. Popy is best known for the Chogokin robot figures. Their toys were designed for candy shops but they began to license characters from tokusatsu, anime and manga series.3 Popy is well known for its Kingsaurus line of Ultraman and Godzilla soft vinyl figures from which Mattel created its Godzilla’s Gang.

Above: Large pronounced dorsal fins, spring firing right hand and yellow pull string of the roaring gimmick. Below: The Japanese warning label under the tail and the Popy manufacturing label on the foot.

The Popy Godzilla Jumbosaurus has a beautiful box design similar to that of Mattel Shogun Godzilla. Mine did not come with its cool box. So I recreated the box art. My Shogun Godzilla box has been long lost too. There is nothing that can take away the wonderful feelings of completeness that I have with this fine vintage toy in my collection.