As I was searching through my Godzilla books down in my basement, I came across this old flyer. My mind went down memory lane. During the 90s, every second Saturday in the month was special because we had the Japanese Animation Society (a.k.a., the CFO) to go to. My friends, Eric, Henry, and Jonathan, and I would pile in the car or jump on SEPTA and head on down to the local Nationalities Service Center building at 13 & Spruce Street. 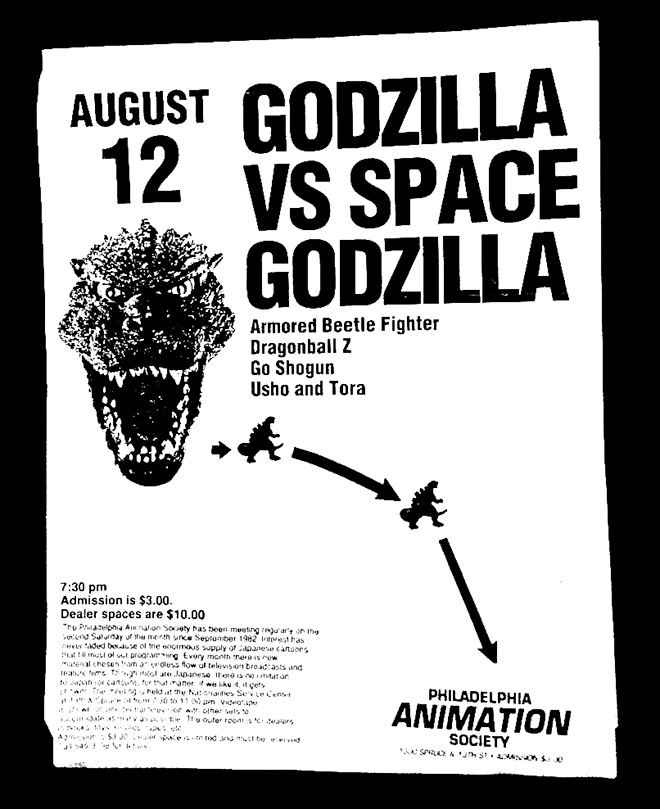 During those years, the latest Godzilla movies, tokusatsu, and Japanese animation were not readily available as they are today. There was only a small cult following dedicated to getting videos (VHS tapes, laser discs, and later DVDs) from Japan. We had to wait months to see any new releases. We could also rely on the faithful vendors (particularly, Chris) at the CFO. I’m very thankful to those older die-heart fans.

On this night, Godzilla vs. Space Godzilla was airing. I had seen it previously in Japanese theaters. But it was a pleasure watching it on a TV set with friends.

Jonathan and I were reminiscing on a phone call the other day about picking him up from the Terminal at 69th & Market Streets or 63rd Street SETPA El stop on our way to the CFO. Those were the days!

The bottom of the flyer provided a short description of the Philadelphia Animation Society: “The Philadelphia Animation Society has been meeting regularly on Second Saturday of the month since September 1982. Interest has never faded because of the enormous supply of Japanese cartoons that fill most of our programming. Every month there is new material chosen from an endless flow of television broadcasts and feature films. Though most are Japanese, there is no limitation to Japan (or cartoons, for that matter. If we like it, it gets shown.) The meeting is held at the Nationalities Service Center at 13th & Spruce St. from 7:30 to 11:00 pm. Videotape is shown on one central television with other sets to accommodate as many as possible. The outer room is for dealers in books, toys, records, tapes, etc. Admission is $3.00. Dealer space is limited and must be reserved.”