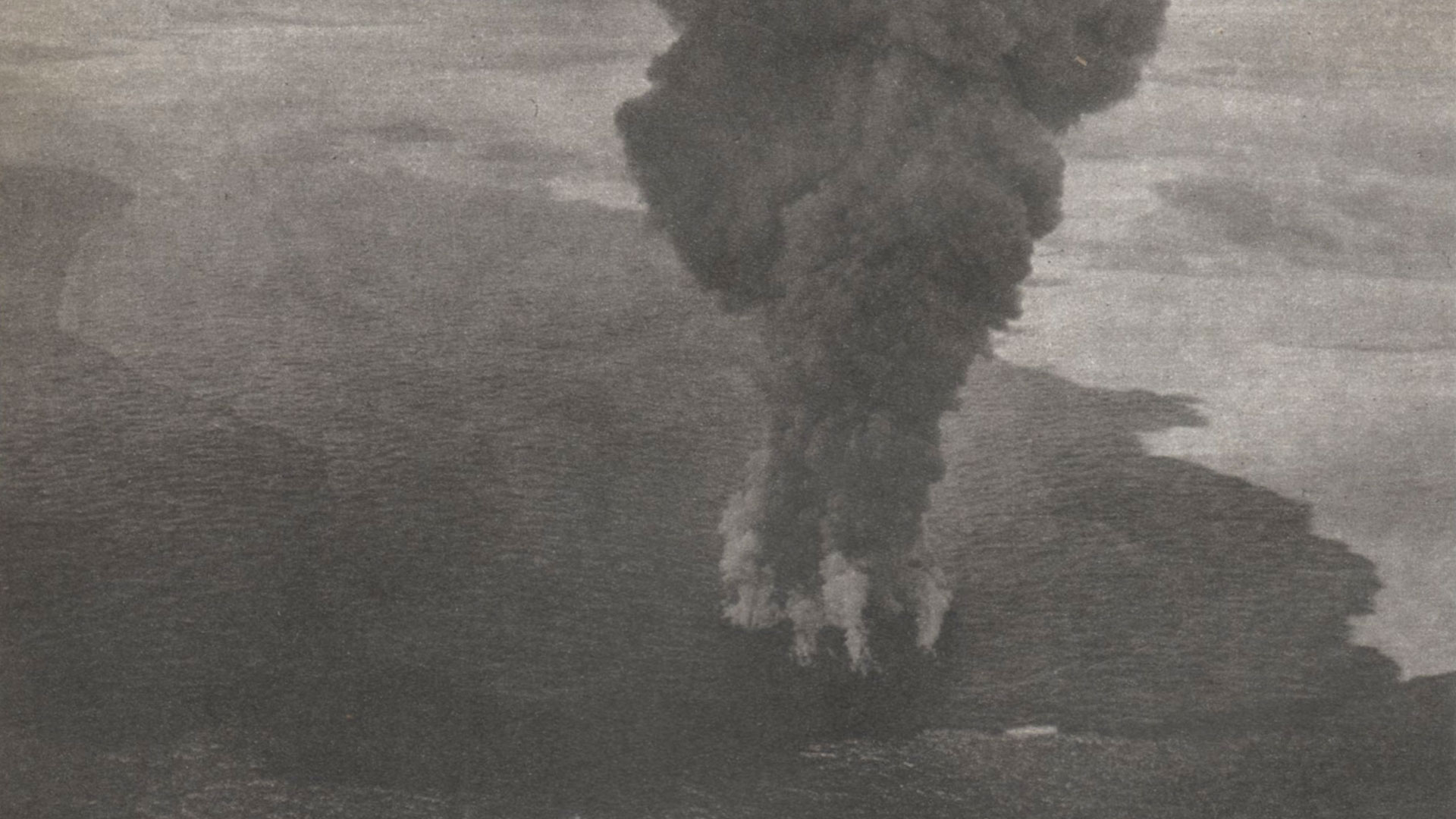 Godzilla and the Myojin Reef

Godzilla (1954) is a way of retelling and reliving important tragic events in postwar Japan. Of course, Godzilla reminds audiences of the dropping of the atomic bombs on Hiroshima and Nagasaki in 1945 and of the Lucky Dragon No. 5 exposed to the Bikini Atoll H-bomb tests in 1954. And Godzilla is connected to the weather event of Typhoon Marie. And also to an eruption referenced directly in an easily forgotten scene that further roots the meaning of Godzilla in reality.

Official-in-charge (係官)8: ｢全然見当がつきません まるで明神礁の爆発当時そっくりです｡ いきなりＳＯＳを発信して、消息をたったんですから……｣ “We don’t know. It was like the time when the Myojin-sho exploded. It suddenly sent out an SOS and we got the news…” (Godzilla 1954, 5:00 mark, Watch Now)

It was a peaceful night at sea as the crew of the Eiko-Maru enjoyed the play of the harmonica and guitar sitting on deck after a long day of fishing. Then everything changes with a great disturbance in the sea and a tremendous flash of blinding light. An emergency S.O.S. was sent to the mainline as the crew and their ship sank into a sea of fire. Officials and families searched for answers. When the official in charge was asked what could have caused this, he replied, “We don’t know. It was like the time when the Myojin-sho exploded.” In this moment the mysterious and sudden destruction of the Eiko-Maru by Godzilla is likened to the real-life Myojin-sho volcano explosion of 1952.

On September 17, 1952, the Myojin-Sho (明神礁, Myojin Reef), located on the Izu-Ogasawara Ridge in the Izu Islands, exploded when a submarine volcano about 450 kilometers south of Tokyo erupted.1 The reef was the product of a post-caldera volcano. That day, a radio report from the crew of the fishing boat Myojin-Maru No. 11 reached the Yaizu City radio station detailing many explosions and smoke rising 500 feet into the air. At that time an island appeared which the coast guard would subsequently named the “Myojin Reef” after the boat on the 18th. The Japan Coast Guard issued a public warning and dispatched the patrol boat Shikine (しきね) to the site to confirm the report.2

Top: Eruption of Myojin-Sho submarine volcano from patrol vessel Shikine of the Maritime Safety Agency (September 19, 1952; Source: Wikipedia) Below: The Shikine (しきね) used to travel to Odo Island to investigate Godzilla (17:04 mark, Watch Now) and used to transport the Dr Serizawa and the Oxygen Destroyer to destroy Godzilla (1:24 mark, Watch Now). The ship name can be seen on the banner and life preserver.

Deepen the connection between Godzilla and the Myojin-Sho explosion, the Shikine appears in Godzilla.3 4 The Shikine was used to transport Dr Yamame, his daughter Erika, Ogata and the others to Odo Island to determine the cause of the ship disappearances just as it had been dispatched to the Myojin Reef in 1952. Later in the film the boat is deployed again to transport Dr Serizawa to deploy his secret weapon against Godzilla. Both scenes are accompanied by the famous upbeat soundtrack, named after the ship, “Shikine Departure (Frigate March I) (M11)”「しきね出港 (フリゲートマーチI) (M11)」composed by Akira Ifukube (Listen Now).

On September 24, 1952, the oceanographic and weather research ship Kaiyo-Maru No. 5 (第五海洋丸) was dispatched but suddenly disappeared. An initial search found no remains of the ship and no cause was unknown. Later, a survey buoy, ship fragments, and a life preserver with the ship’s name written on it were found floating on the sea.5 False such of U.S. warships colliding and of a Soviet submarine sinking among other rumors circulated. It was determined that the ship was destroyed by the volcano, sunk by water and tephra, killing its crew of 31 including nine research scientists.6 On December 22, The Japan Coast Guard commission concluded: “At around 12:20 on September 24, 1952, the Survey Vessel No. 5 Kaiyo-Maru of the Hydrographic Department of the Japan Coast Guard received an explosion from a submarine volcano from the starboard obliquely downward direction while working near Myojin-Sho, and the starboard side of the upper structure was damaged. The ship was almost destroyed and scattered, and the hull immediately capsized and sank.” (“Daigo Kaiyo-Maru Distress Investigation Report” p.8)7 The ship’s destruction stands out as an example of a volcanic eruption killing at one time such a large number of volcanologists and engineers engaged in observational research primarily.

In Godzilla, the sudden destruction of Eiko-Maru is like that of Kaiyo-Maru at the Myojin Reef. After further research led by Dr. Yamane, Godzilla was determined to be the cause of its destruction along with the subsequent destruction of the Bingo-Maru. The appearance of Godzilla is like the sudden eruption of Myojin-sho consuming boats at sea. Myojin-Sho eruption reveals Godzilla as a powerful life-threatening force of nature waiting to be discovered and understood.

The fictitious story of Godzilla unfolding on screen takes its direction from real events not so far removed that shape and deepen the meaning and significance of Godzilla. The monster arises out of tragic post-war events. Godzilla is best understood in light of these historical contexts. Toho’s monster is a powerful way of remembering, reimagining and retelling those real-life tragedies that influence audiences then and now.

4 Source: Wikipedia: ちふり型巡視船
『ゴジラ』「こうず」と「しきね」が登場。主人公たちやオキシジェン・デストロイヤーを使用する芹沢博士をゴジラが潜む海域まで送り届け、ゴジラと博士の最期を見届ける。海上保安庁の全面協力により、撮影には実物が使用されている。”Godzilla”: “Kozu” and “Shikine” appeared. Send the main characters and Dr. Serizawa, who uses Oxygen Destroyer, to the sea area where Godzilla hides, and see the final moments of Godzilla and the doctor. With the full cooperation of the Japan Coast Guard, the real thing is used for shooting.

8 Ren Imaizumi (今泉廉, いまいずみれん) is the Chief of the Radio Division of the Japan Coast Guard (海上保安庁の無電課長).In “Rodan, the Big Monster in the Sky,” he played the role of Engineer Sunagawa of the Earthquake Research Institute, and in “Earth Defense Force,” he played the role of Assistant Engineer Hayami of Dr. Adachi, played by Takashi Shimura. (Source: 初代ゴジラ 研究読本, 洋泉社 p 106)