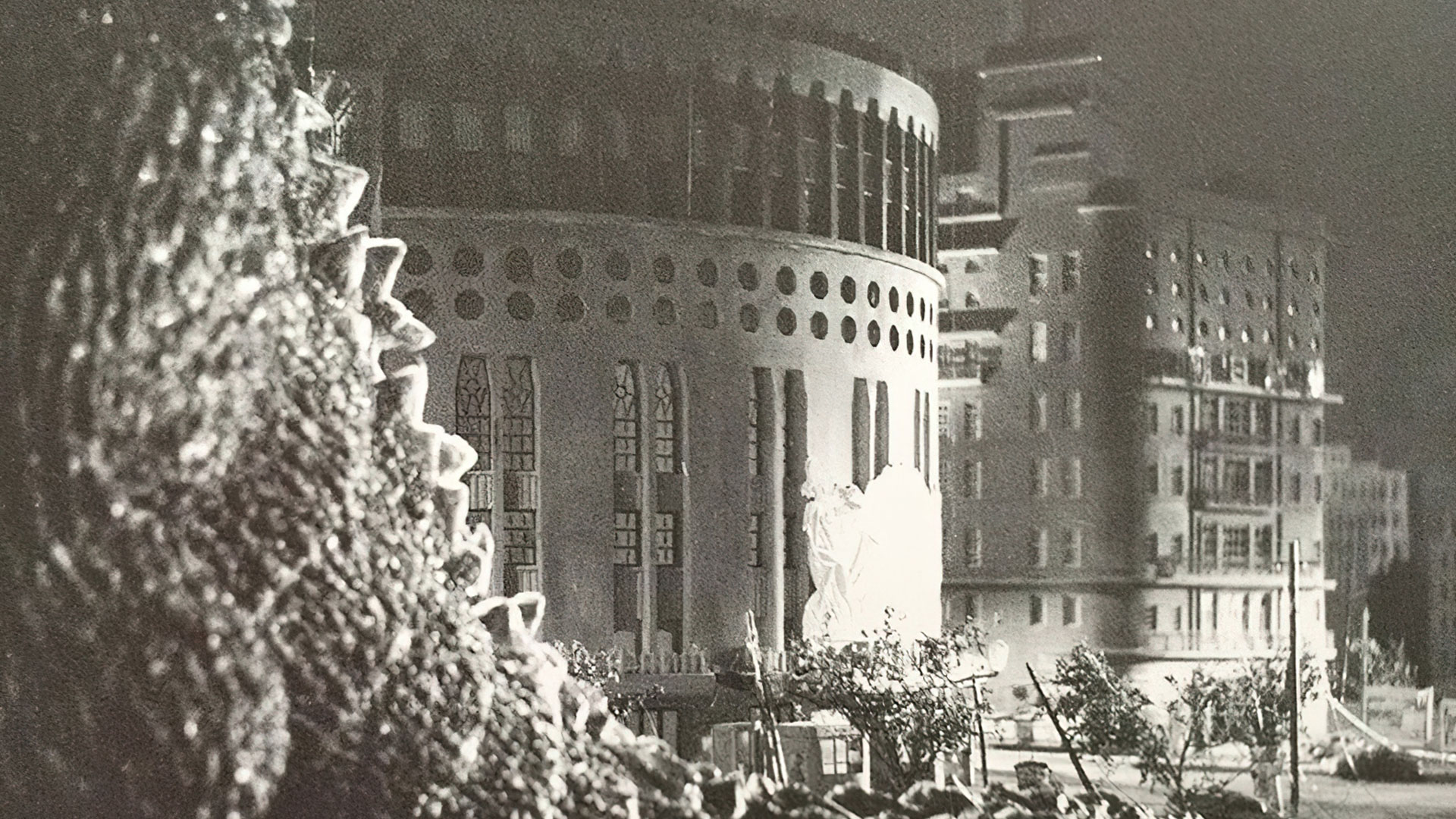 Who can forgot the destruction scenes from Godzilla (1954)? Godzilla lands in Tokyo and ravages. Along the way, he smashes many iconic sites including the Wako Clock Tower in Ginza. Those who watched the film at the Nippon Theater (日本劇場), only a short walk down the street from the Wako Building, were in for a frightening and unforgettable surprise when Godzilla appeared right on the outside slashing it with his powerful tail. Take a look!

The Nippon Theater opened December 24, 1933. It was known as Nichigeki for “Japanese drama” (日劇, にちげき). The theater was to be a high-class movie theater with a large capacity of 4000 people. Its design was innovative for that time with epoch-making architectural elements such as curved out walls, a vast stage, and Art Deco interior. It was run by Nippon Movie Theater Co. Ltd. until Toho rented and took over management. Nippon Theater closed its doors on February 15, 1981, due to its prewar construction and obsolete equipment. The theater was dismantled along with the neighboring Asahi Shimbum Tokyo Headquarters. In its place, the Yurakucho Marion building was constructed along with TOHO Cinemas Nichigeki (TOHOシネマズ 日劇), which inherited its name along with its history.1

TOHO Cinema Nichigeki was opened in 1984, located in 2-chome, Yuraku-cho, Chiyoda-ku, Tokyo. It was the home of three theaters, the Nippon Theater, the Nichigeki Toho, and the Nichigeki Plaza, with the total of 2136 seats. Later that year Godzilla returned to the silver screen and like its predecessor, he smashed the theater shattering its glass exterior and facade. Toho Cinemas Nichigeki closed February 4, 2018. It was in operation for 34 years. Along with the Nippon Theater, together they span 85 years of Japanese cinema history. 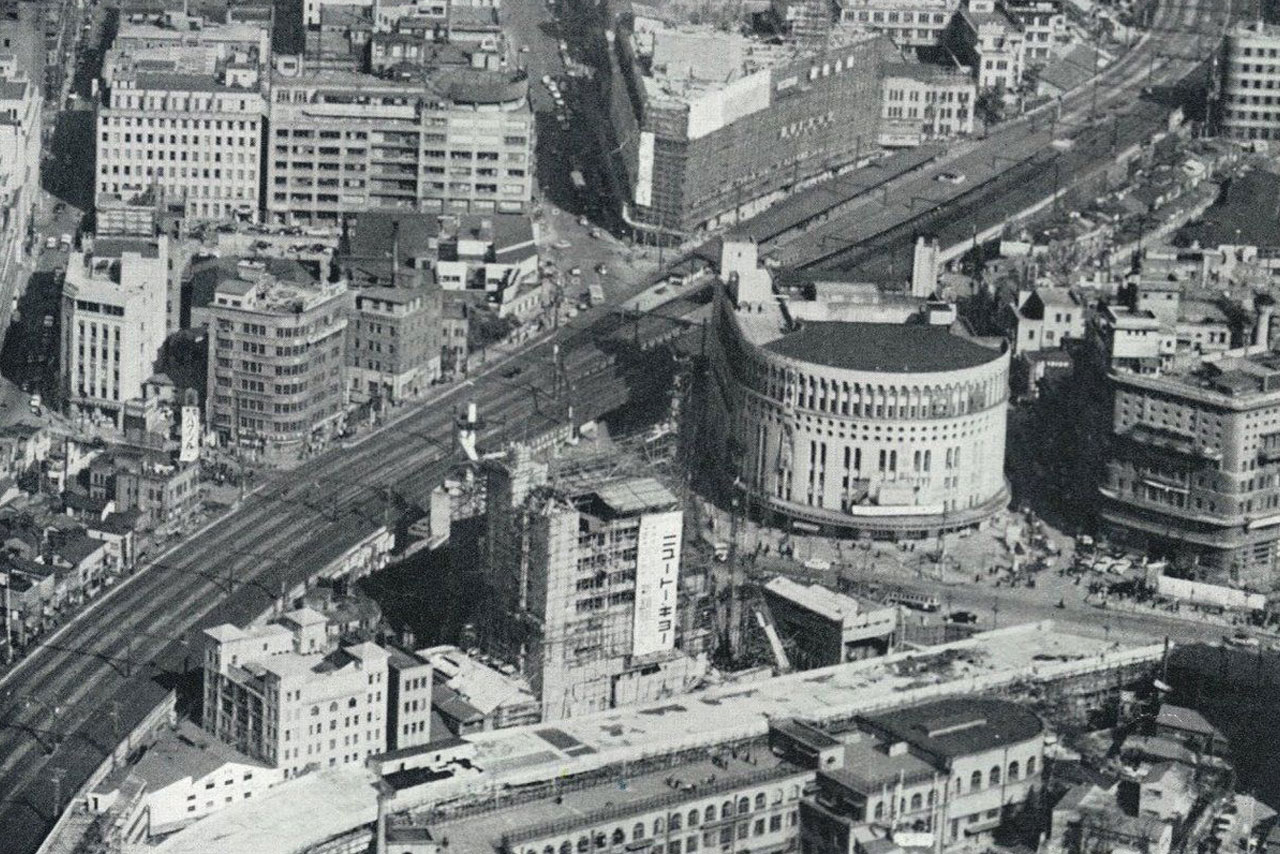 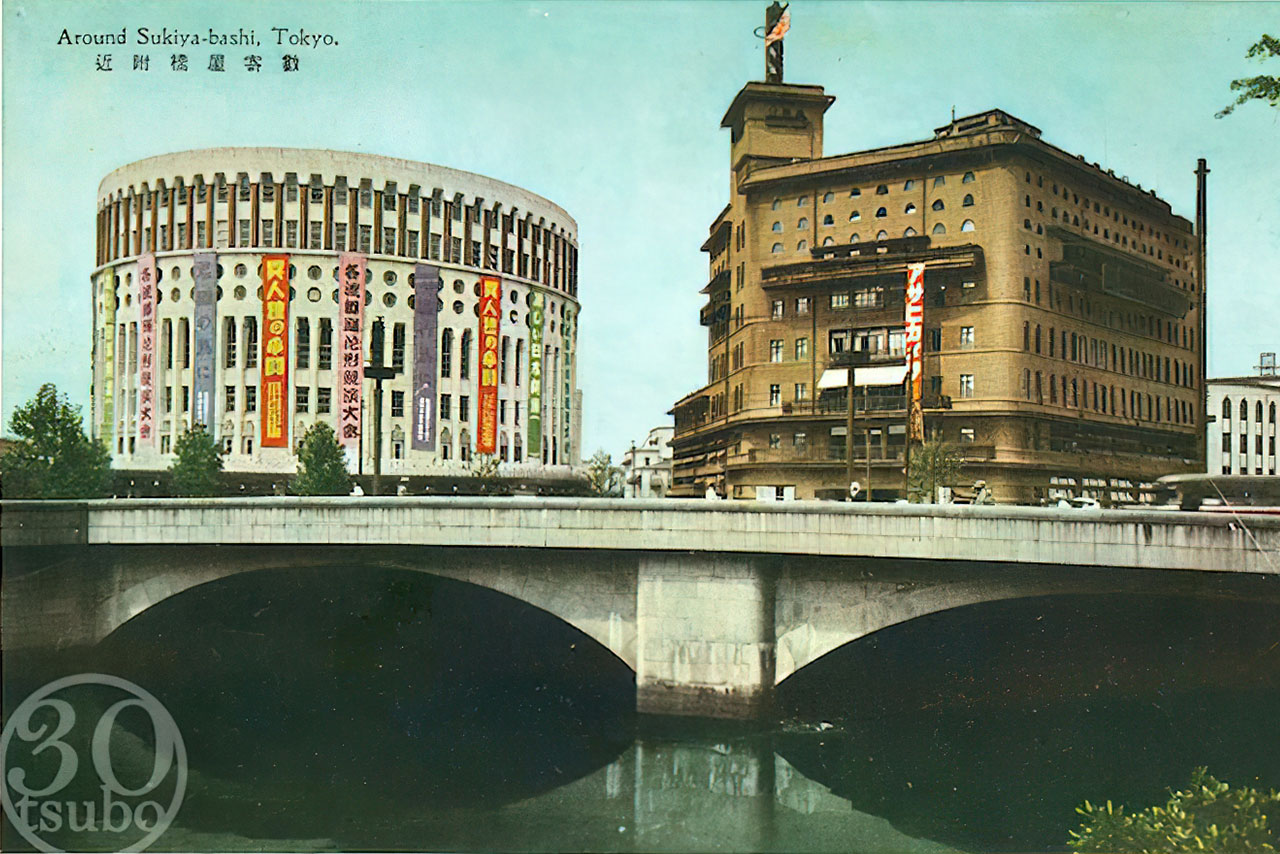 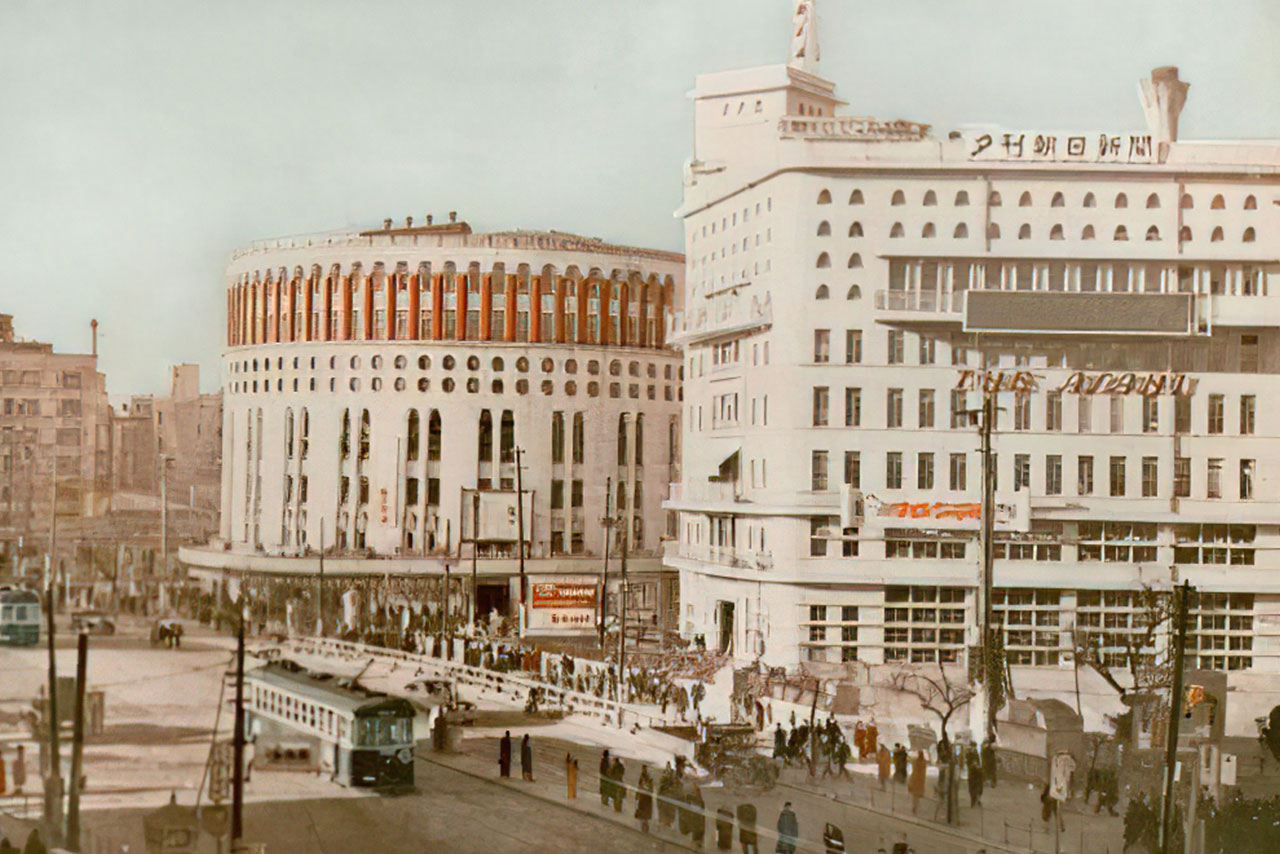 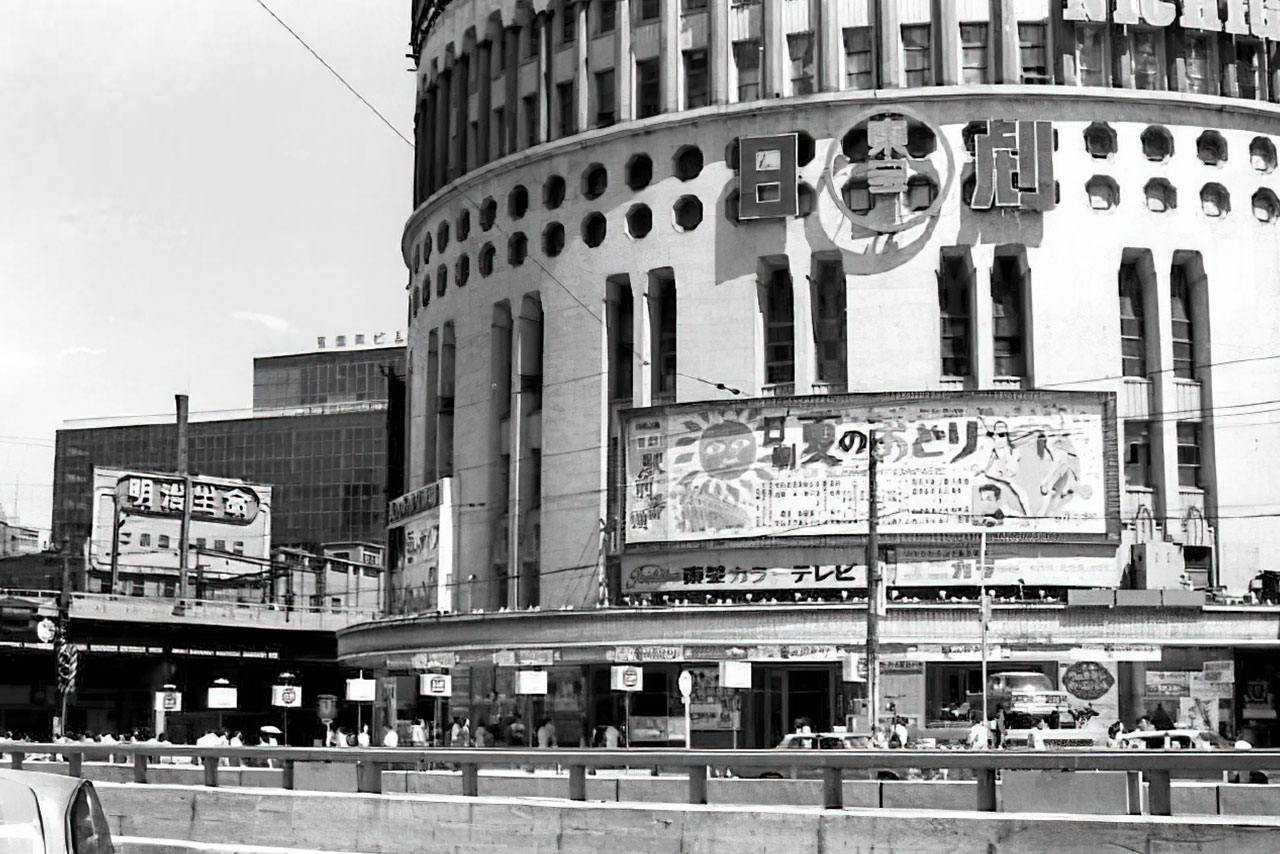 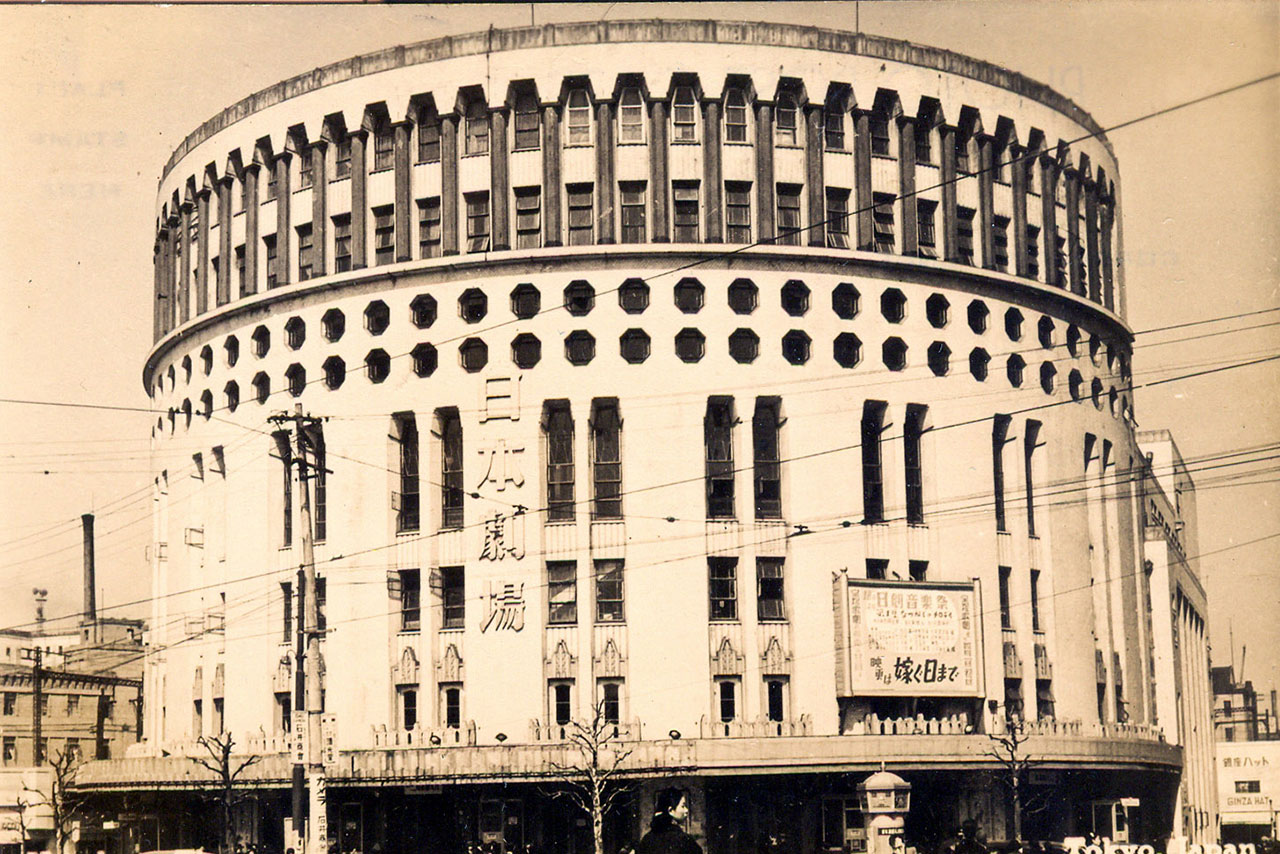 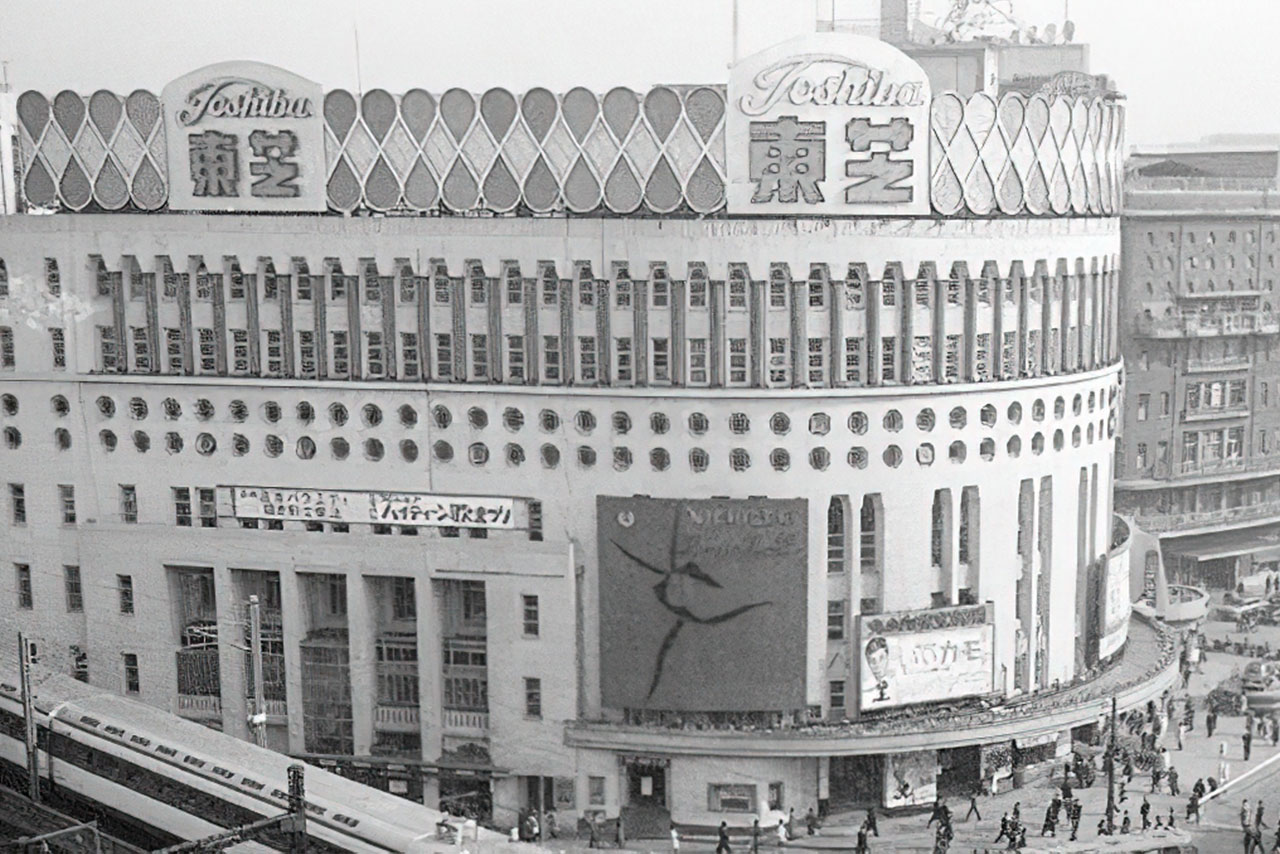 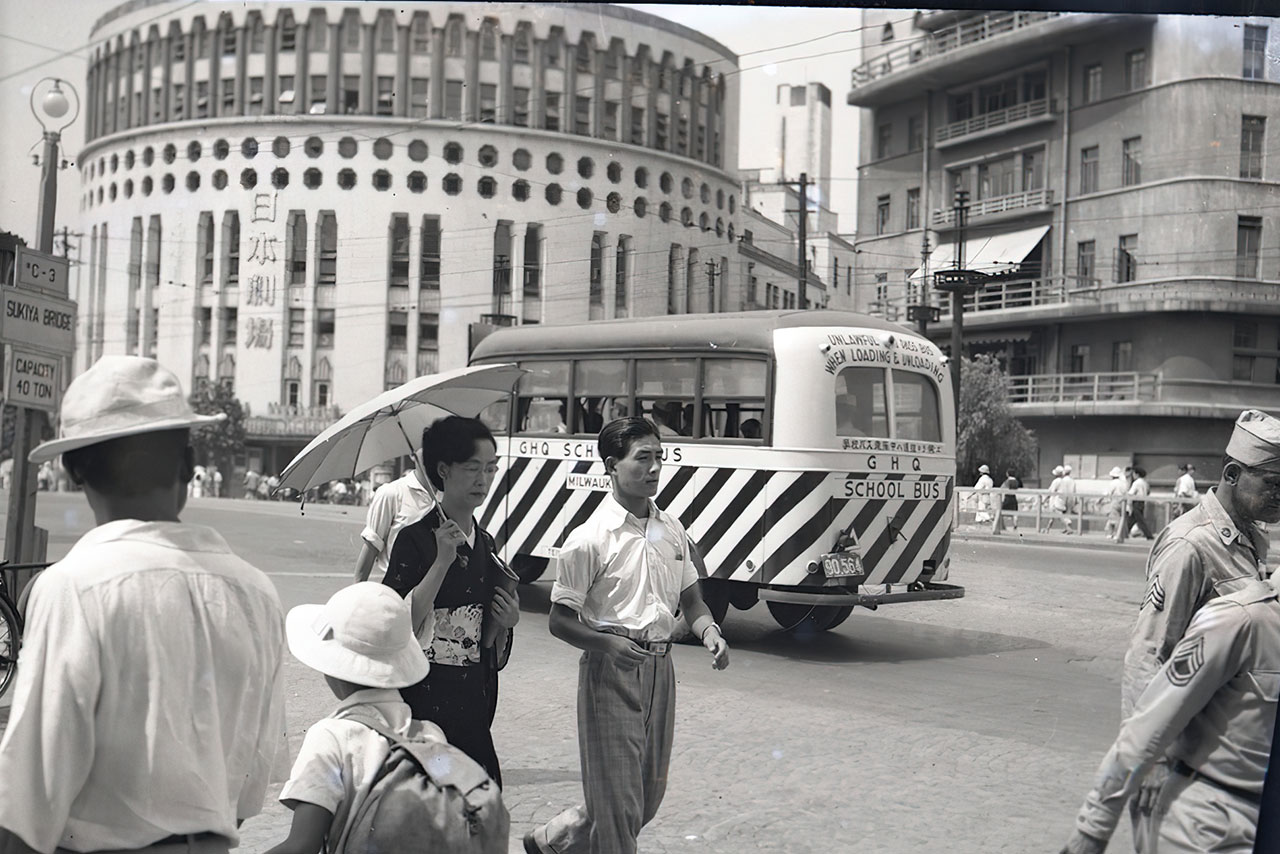 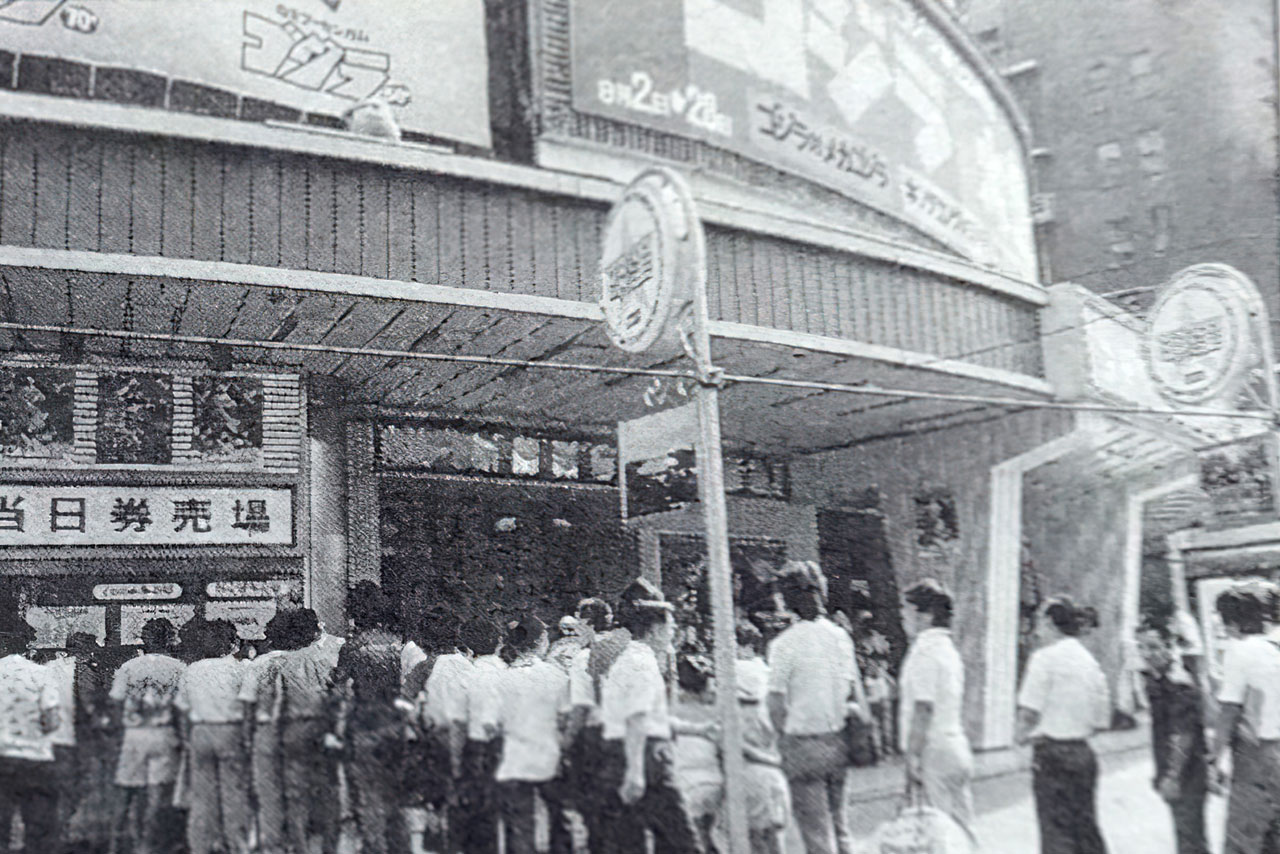 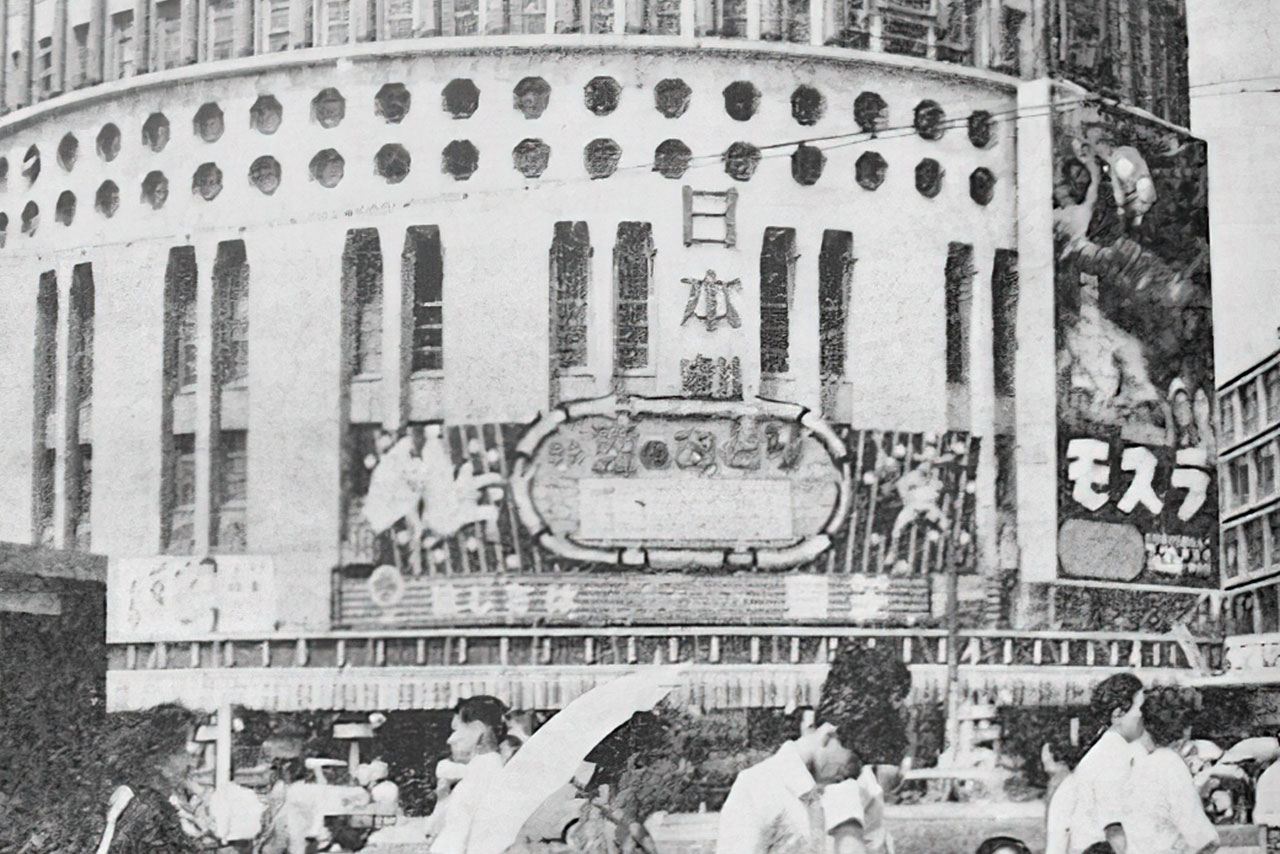 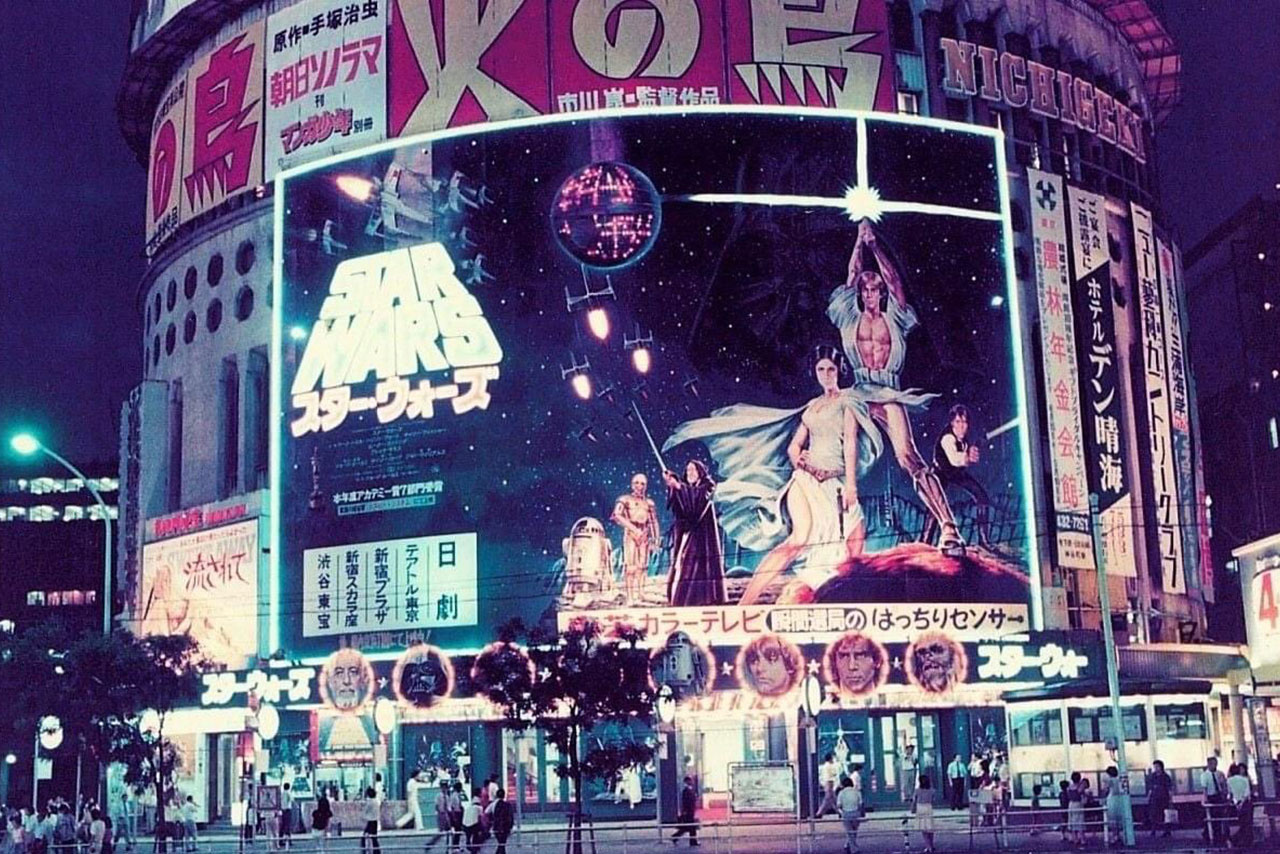 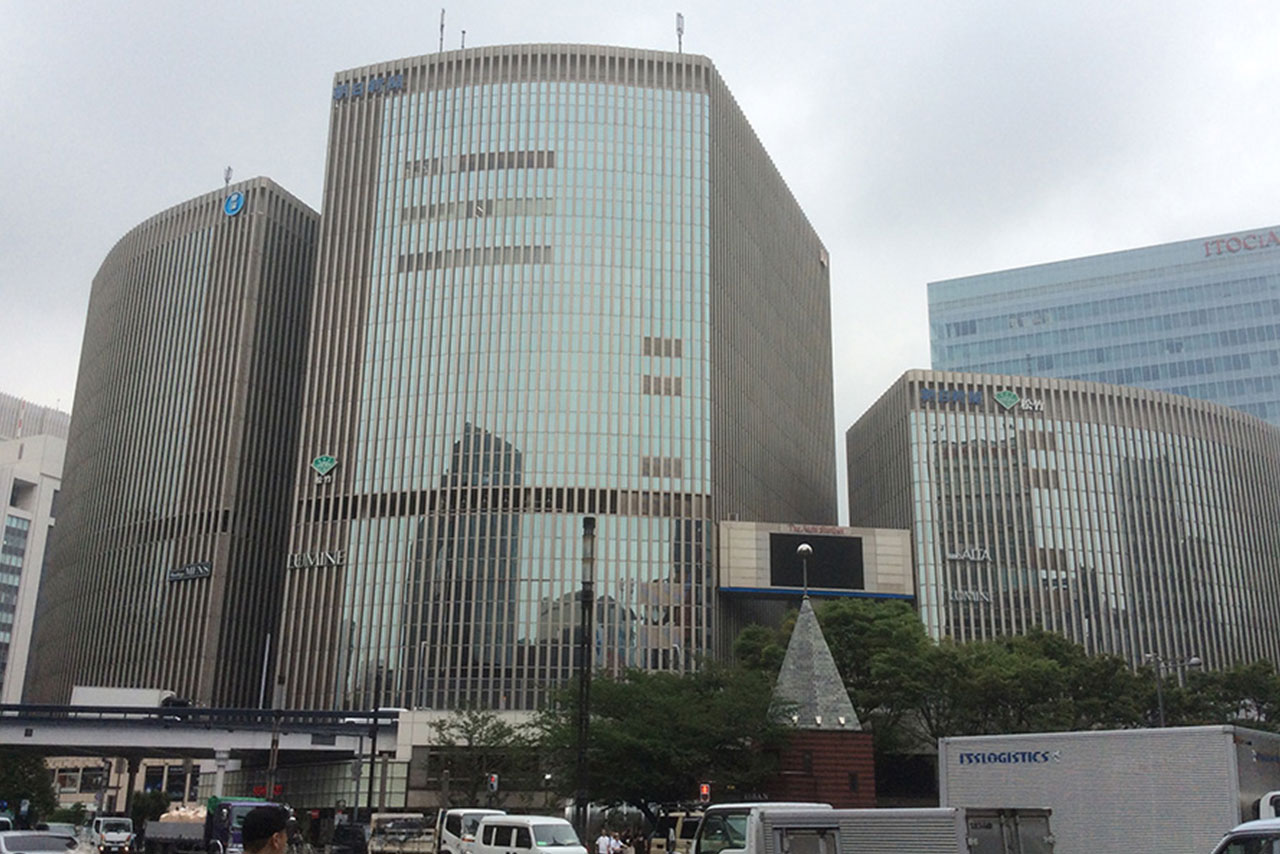 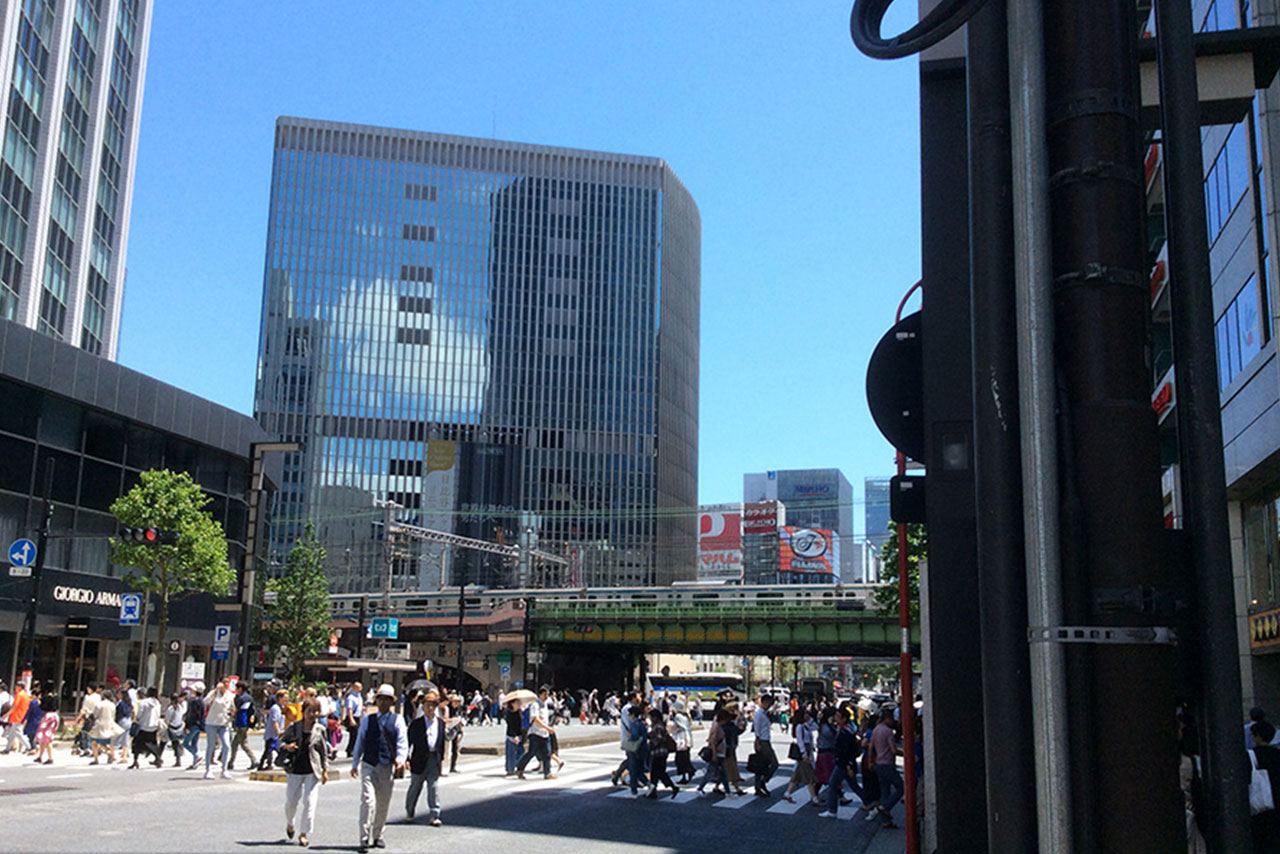 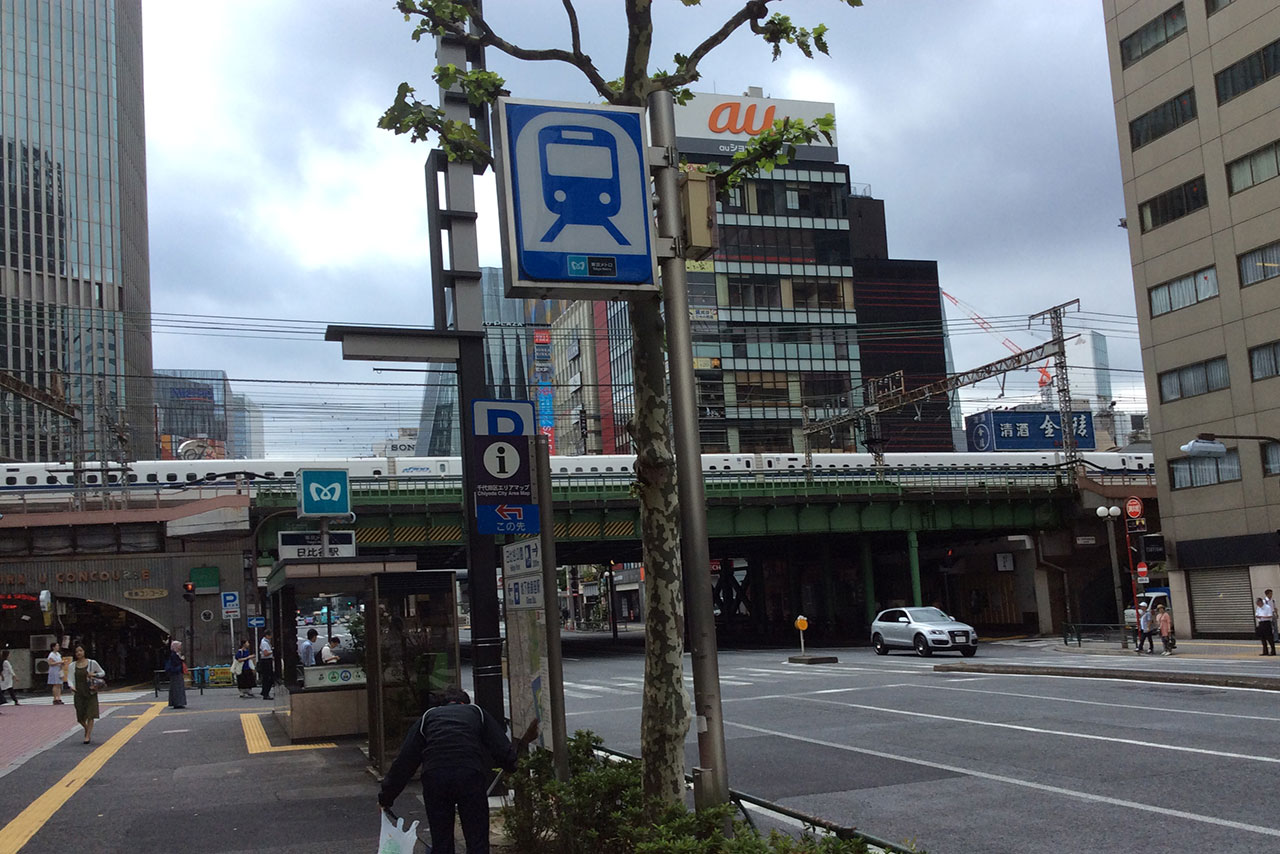 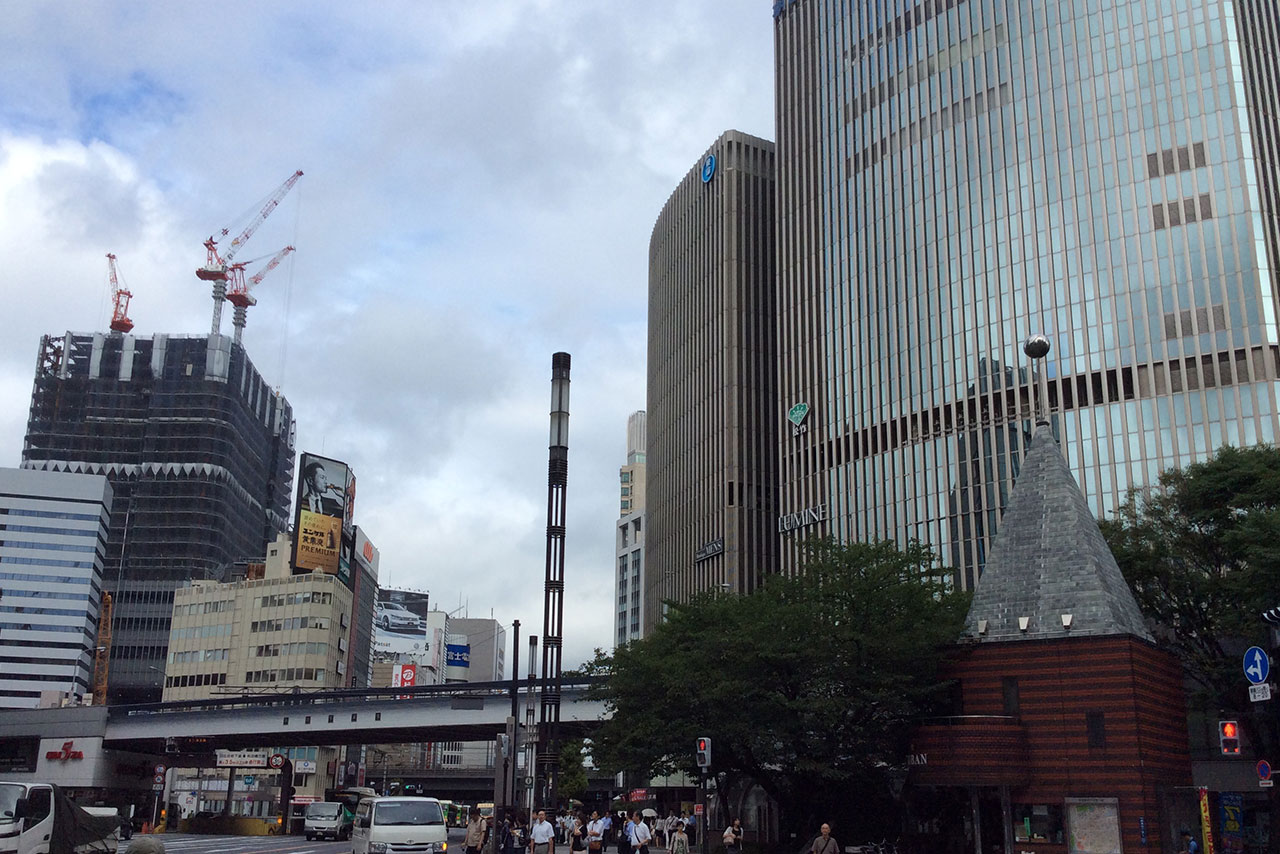 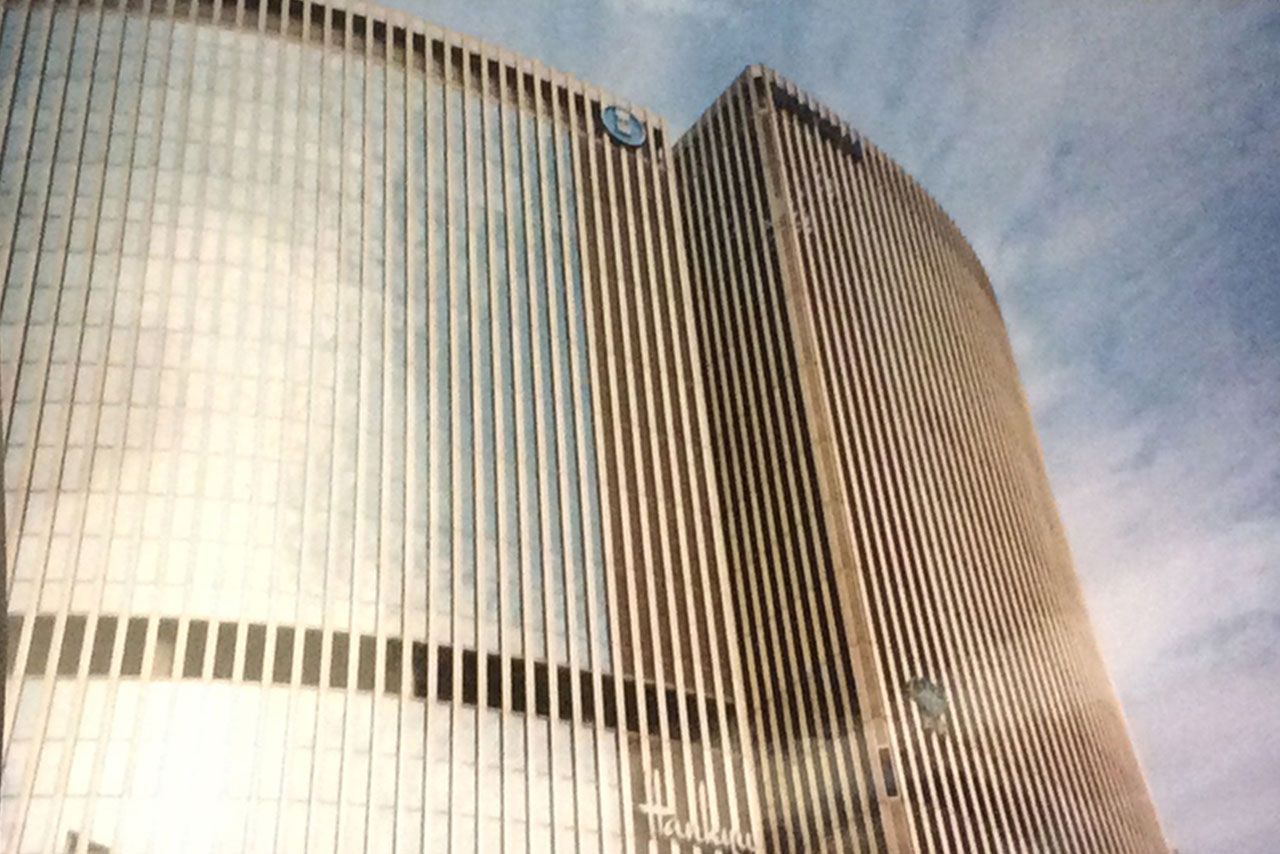 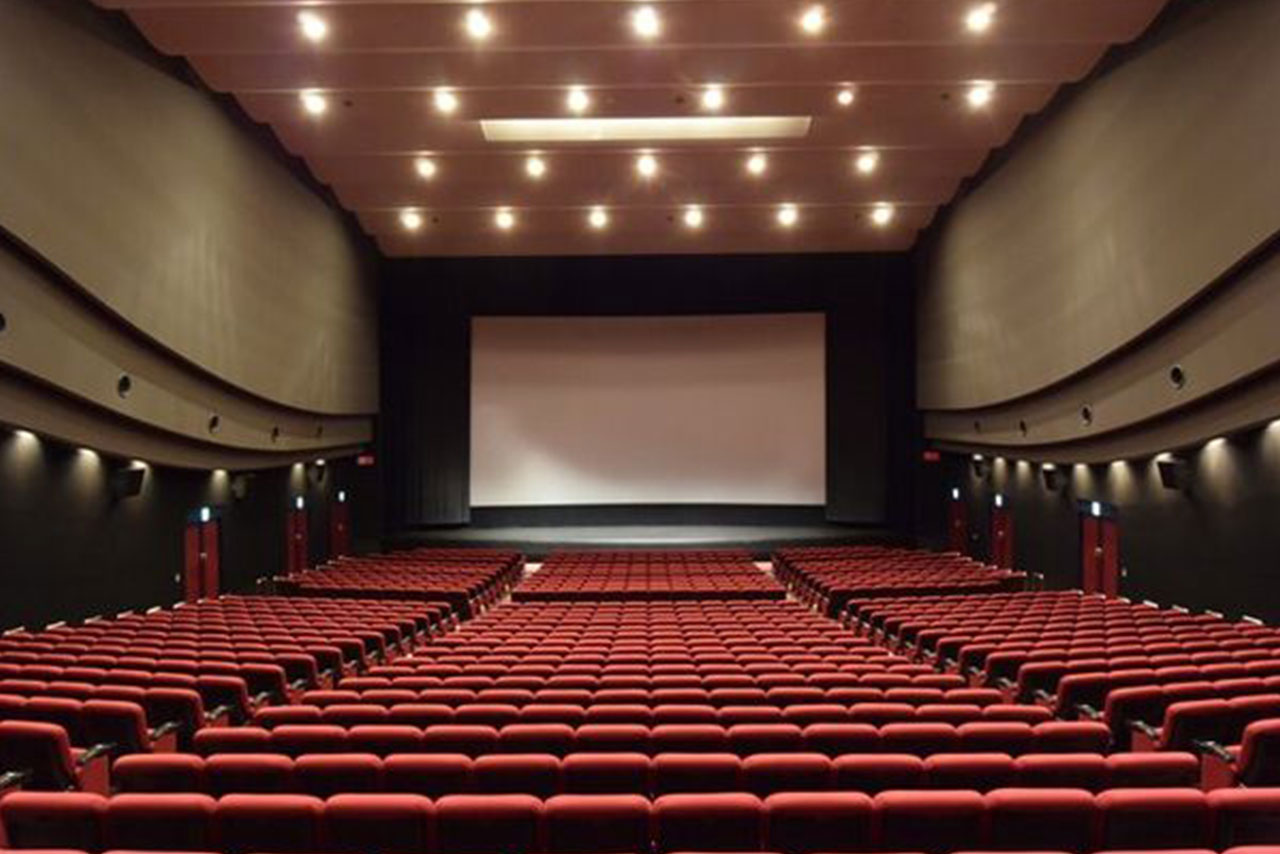 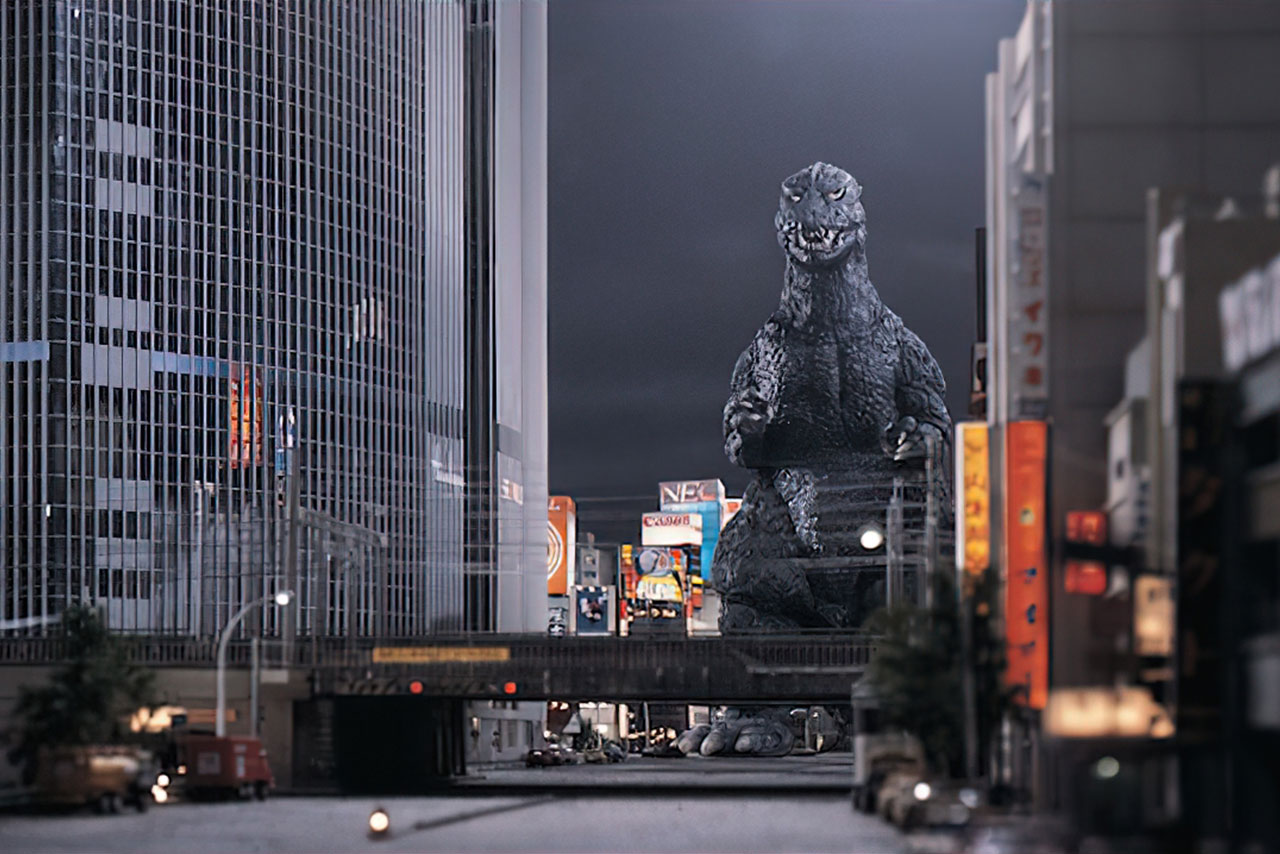 85年分のありがとうを込めて With thanks for 85 years

As of February 4, 2018 (Sunday), we have been the leading Japanese movie theaters. “TOHO Cinemas Nichigeki” will be closed. We will hold a special screening with gratitude for the 85 years of question and patronage. With lineup of works suitable for showing the last, we are looking forward to seeing you there.

今後は「日劇スピリット」を継承し、2018年3月29日に誕生する
「TOHOシネマズ日比谷」にご期待ください。
In the future, we will inherit the “Nichigeki Spirit” and will be born on March 29, 2018. Please look forward to “TOHO Cinemas Hibiya”.

Some showing had guest appearances. Here is Akira Takarada after the final showing of Godzilla (Photo: むらびと @Gila_S5)

On my first trip to Japan in 1994, visiting the TOHO building was a must. In 2016 I stopped there for information on Shin Godzilla tickets. In 2018, I arrived too late to attend the Goodbye Nichigeki Last Show event. I remember seeing tweets celebrating the event and occasion. Recently, I purchased several commemorative items from the event: Nichigeki pamphlet documenting the theater’s history and the Godzilla 1984 film bookmark (ゴジラ(1984) さよなら日劇ラストショウ, approx. 9.5 x 3.5 cm).

TOHO Nichigeki Theater was full of wonderful memories for Japanese moviegoers. Seeing the theater close was no doubt a great loss. New memories are being made at new TOHO theaters in the area. Over the years, I’ve had the privilege of many wonderful Godzilla movie memories in Tokyo and across Japan.