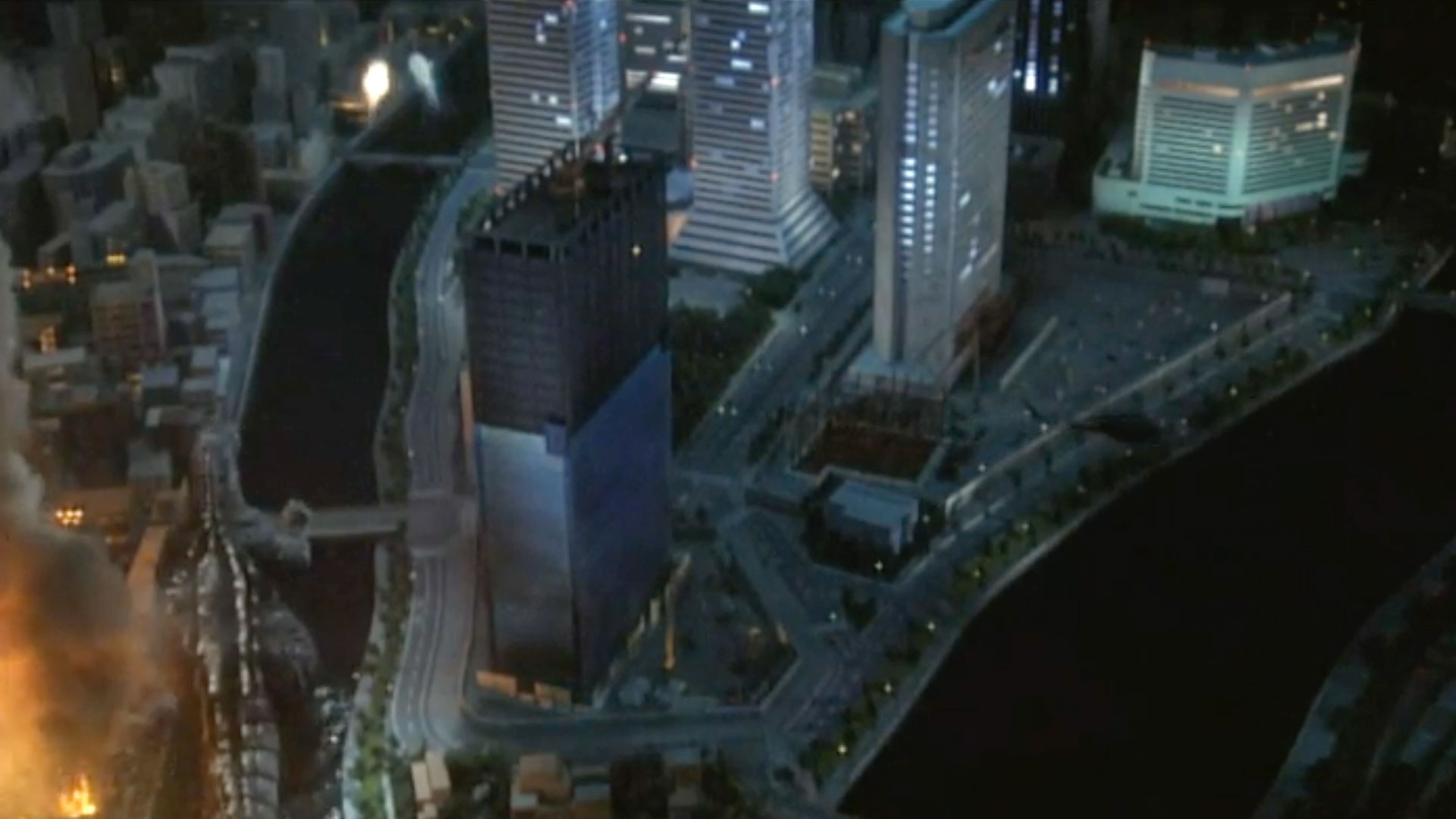 Lately, I’ve been watching a lot of Godzilla vs Biollante (1989). This morning I got up with Lieutenant Goro Gondo on my mind along with Osaka’s Twin 21. In 2019, I returned to Japan and made my way to landmark Godzilla places in Osaka. I followed Godzilla’s path along and across the Neya River to Twin 21 where Gondo met Godzilla-san in person for the first and last time.

Twin 21 is a 38-story 157 meter skyscraper built on March 14, 1986 in Osaka, Japan (2-1-61 Shiromi, Chuo-ku, Osaka-shi, Osaka, etc.), for office space with a commercial district.1 It has twin towers, the National Tower and MID Tower. Twin 21 is situated at the confluence of the Neya and Ogawa Rivers.2 Entrance to the towers is through a commercial facility with event space from the underground floor to the fourth floor. Immediately upon entrance the large Panasonic television screen cannot be missed. For Godzilla fans, Twin 21 is a recognizable location made popular in Godzilla vs Biollante (1989). Unfortunately, It was Lieutenant Goro Gondo’s final destination.

Goro Gondo (権藤 吾郎) is a colonel in the J.S.D.F. and one of the leaders of its anti-Godzilla unit, along with his partner Sho Kuroki. 3 Gondo along with his team arrived in Osaka by military helicopter. Upon exit, they crossed over the Osakajoshin Bridge over the Daiei Neya River. They immediately enter the evacuated Twin 21 and Goro begins climbing above the 25th floor of the National Tower, where he fire the ANB into Godzilla’s mouth. As he begins his ascent, the Panasonic screen displays “Welcome to Twin 21” followed by a live feed of Godzilla approaching. After successfully firing ANB into Godzilla’s sides, Gondo’s life is taken by Godzilla who approaches. Knowing Godzilla approaching, he locks and loads his web firing another shot into Godzilla’s mouth. Lt. Gondo tips his helmet and saids in English dubbed version, “All this intravenous stuff is no good for you. Stick to smoking.” In the Japanese release, his final words are, 「薬は注射より飲むのに限るぜ。ゴジラさん｡］liberally translated, “Medicine should be drunk rather than injection. Mr Godzilla.” Then Godzilla crushes the tower, sending Gondo down to his death. Take a short tour of Twin 21 and following Gondo’s path in my 2019 trip video from Osaka.

Our movie hero didn’t make but Twin 21 still stands today waiting for us to visit. Check out other Godzilla vs Biollante places.