The legendary director Koichi Kawakita (川北紘) was born on December 5, 1942. His best work is on display in the Godzilla Heisei Era. His work touched many lives and put Godzilla on the big screen like never before. On of the lasting legacies of Kawakita is the Godzilla slide in the Kanagawa prefecture. In 1958, there were plans to make a Godzilla slide on Tatarahama beach (たたら浜), Yokosuka, in Kanagawa Prefecture, but at that time Toho would not allow the use of Godzilla’s name (Source: SciFiJapan). What stood there until 1973 was a dinosaur slide. Today, what remains is a Godzilla footprint.

Years later, the Kanagawa Godzilla slide was approved and built by Director Kawakita in Adventure Land (冒険ランド) in Kurihama Flower Park (くりはま 花の国). The slide was opened on November 3, 1999, Godzilla’s 55th birthday, about a month before the release of Godzilla Millennium. To celebrate and to honor him, the Godzilla slide in Yokosuka City and Kurihama Flower Park has been lit up for a limited time since his birthday. I had the honor of seeing the Godzilla slide last year, when visiting my good friend Ed Holland of Monster Attack Team. He took me to see both Godzilla places. 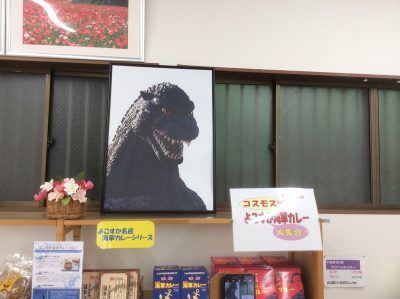 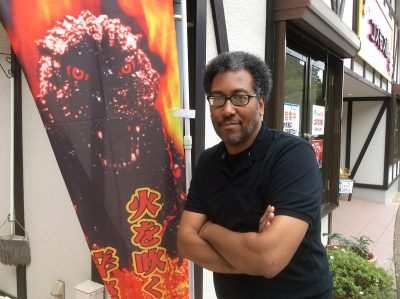 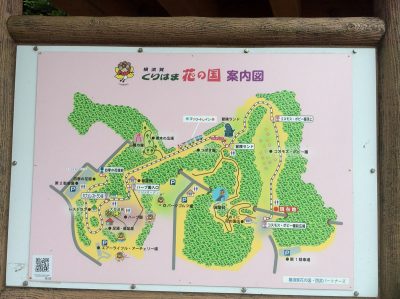 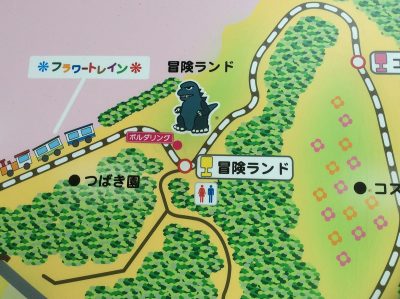 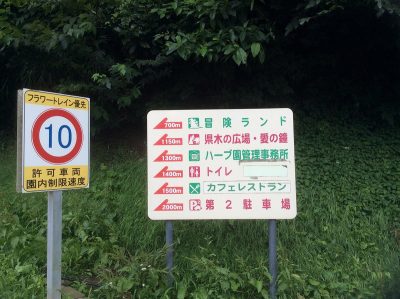 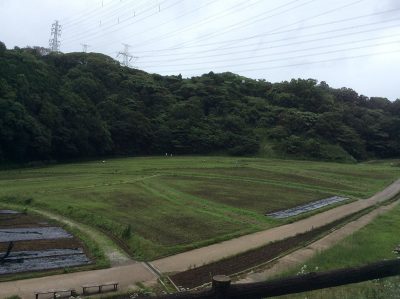 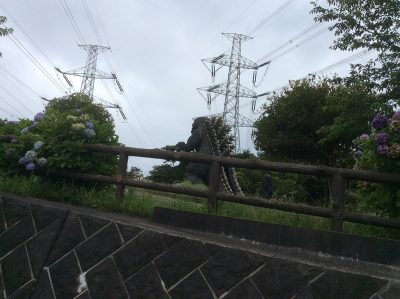 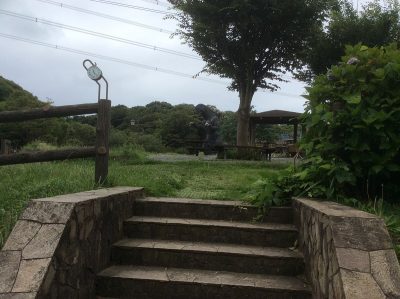 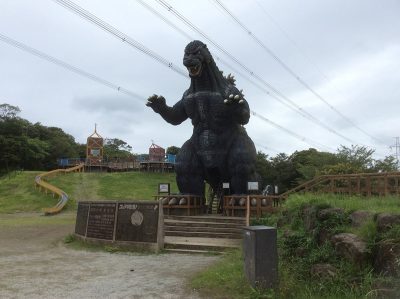 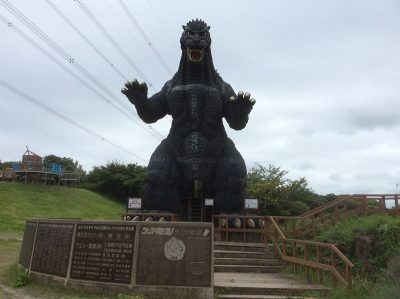 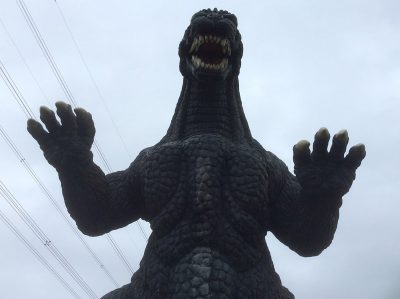 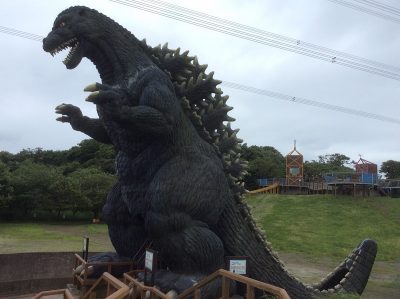 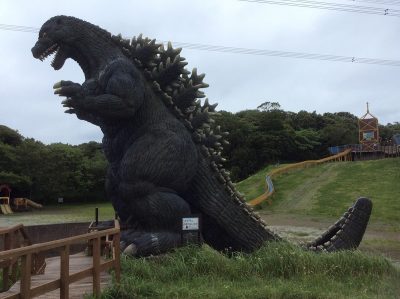 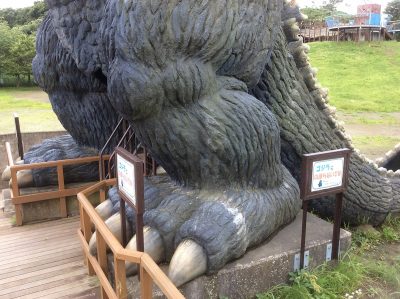 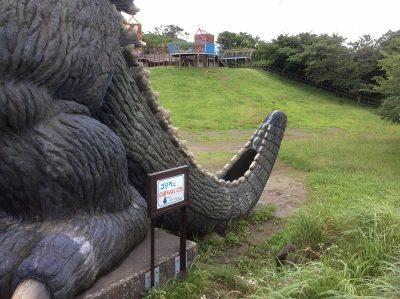 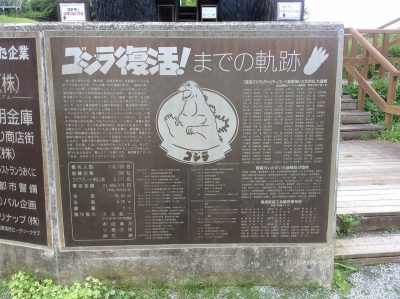 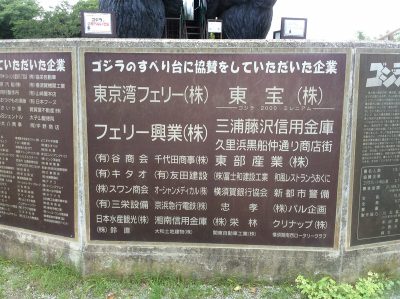 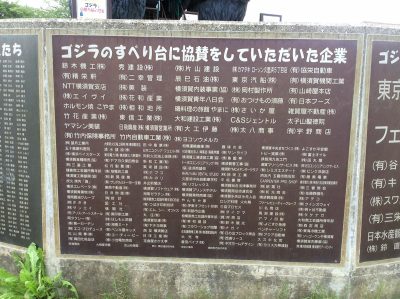 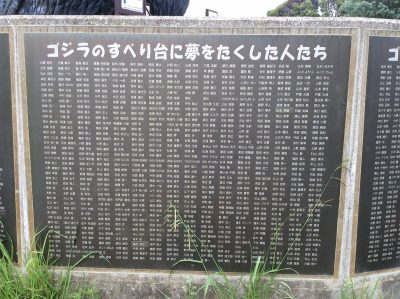 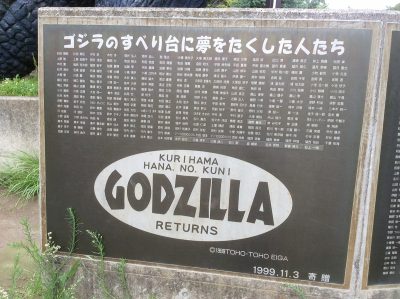 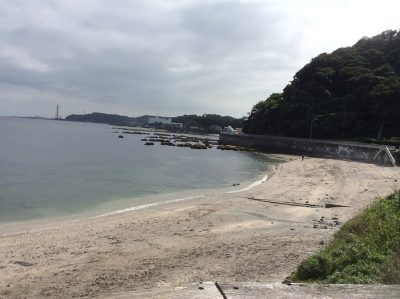 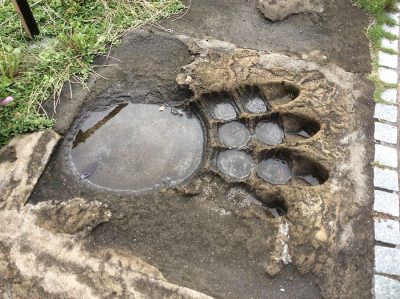 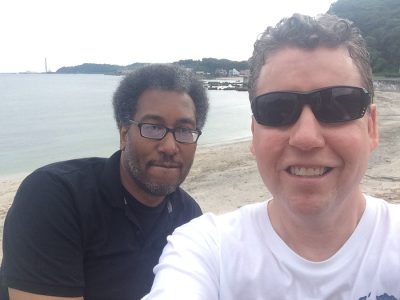 It is a beautiful drive along the Yokosuka coast between both locations. The sign at Tatarama tells visitors to go see the Godzilla Slide at Kurihama Flower Park: どうぞ皆さん、ぜひとも「くりは花の国」に行って見てください。そして、想い出の「ゴジラのすべり…」をすべって見ませんか？『足元の、ゴジラの足跡は、第一作ゴジラの約1/10縮尺です。』Please go to “Kurihama Flower Park” by all means. And why don’t you slide on the “Godzilla slide” that you remember? “The footprints of Godzilla at your feet are about 1/10 scale of the first Godzilla.

Traveling across Japan, Godzilla can be found in obvious and obscure places. There are not only what I love to call Godzilla Places which are movie locations we’ve become familiar with, but Godzilla can be found in various representations such as statues, video games, pachinko machines, figures, paper cutouts, and more. There’s the Godzilla Head in Shinjuku, Shin Godzilla in Hibiya Square, Godzilla at Toho Studios, Godzilla Show Base in Ario Yao shopping mall, and more. Then there is the obscure Godzilla sights like Godzilla paper craft at the Daigo Fukuryu Maru Exhibition Hall. During my trips, I’m always happy to find Godzilla in expected places and odd spaces.