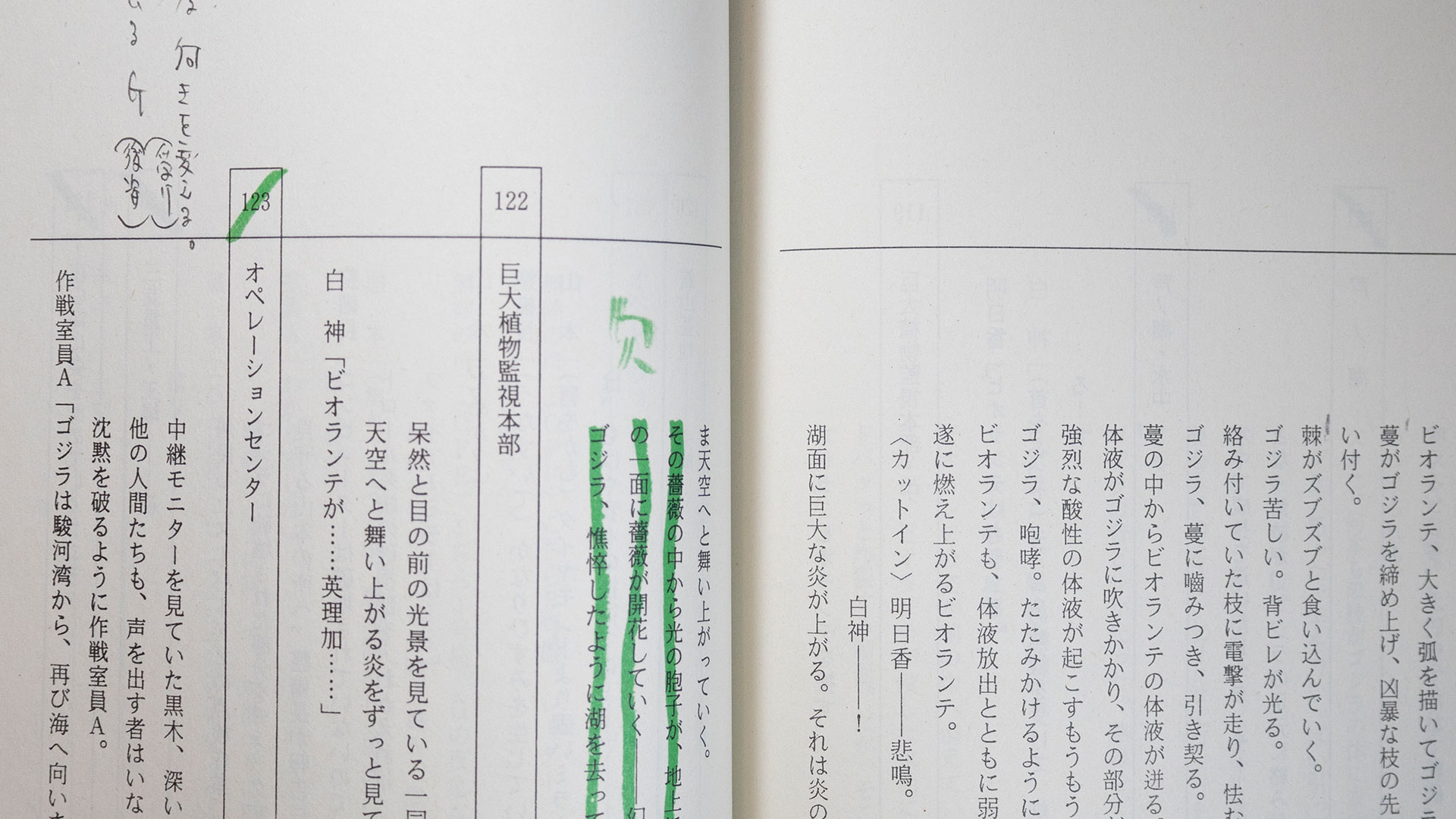 I cherish all my collectibles. But I love movie scripts more than others. I found two reprinted Godzilla movie scripts: 三大怪獣 地球最大の決戦 (Ghidorah The Three-Headed Monster 1964) and ゴジラvsビオランテ (Godzilla vs Biollante 1989). Finding a script is like owning a movie prop. Scripts take you behind the scenes onto the stage during production. They are movie artifacts that give us fans a look at how scenes are constructed and unfold.

This portion of the Ghidorah The Three-Headed Monster script starts around the 39:57 in the film. It is the scene with Professor Murai and his survey team camped at the site of the mysterious meteor. A survey member asks, 「隊長、ありや化ものですョ、どうです、今日は？」”Captain, it’s a mess, how is it, today?” Professor Murai responds,「この前より〇 • 八パーセント大きくなつている」 “It’s 0.8% larger than before.”

Japanese scripts go by several names, 台本 daihon (script), 脚本 kyakuhon, and シナリオ scenario. “A screenplay/script is a written work by screenwriters for a film, television program, or video game. These screenplays can be original works or adaptations from existing pieces of writing. In them, the movement, actions, expression and dialogues of the characters are also narrated. A screenplay written for television is also known as a teleplay.”2 The script is a blueprint that shows the order of scenes, lines, and movements of actors in movies, broadcasts, etc.

This spread of Godzilla vs Biollante (1989) script opens with begins with「完璧に怒ったゴジラ、立ち上がる。ビオランテ、大きく弧を描いてゴジラに反撃。」”Godzilla who is completely angry stands up. Biollante strikes back against Godzilla in a large arc.” On the next page, Column 122 involves dialogue of Professor Shirakami(白神) says,「ビオランテ……英理加……」“Biollante … Erika …” The stage direction states that he along with others are stunned by the scene of Biollante going up in flames (122 巨大植物植視本部 122 Giant Plant Planting Headquarters: 呆然と目の前の光景を見ている一同。天空へと舞い上がる炎をずっと見ている白神。Everyone who is stunned to see the scene in front of them. Shirakami has been watching the flames soaring into the sky.). This occurs about the 56:48 mark. But he actually says these words after the last battle between Godzilla and Biollante right before his death. Miki Saegusa says,「ビオランテ……」“Biollante,” followed by「英理加」said by the Professor (1:46:32). Column 123 shifts to the Operation Center (オペレーションセンター) and military member sitting in dialogue in front of a monitor (中継モニターを見ていた黒木). The green and black marker markup on the script page seems to indicate changes.

Japanese scripts consist of three parts: A) A column (柱) begins with an “〇” where scene numbers can be assigned. This is followed by specifying the place and time. B) Stage directions​ (ト書き) that shows the movement and situation of the person. It is indented three characters from the person’s name at the top. C) Dialogue (セリフ) spoken by a person. The line begins with the person’s name and the dialogue is placed inside of brackets.3

Godzilla scripts are often reprinted in books under シナリオ “scenario.” Scripts are reprinted in the Hobby Japan Godzilla Completion series (eg, King Kong vs Godzilla Completion「キングコング対ゴジラ コンプリーション」published by Hobby Japan). A reprint of the Shin Godzilla (2016) script was included in The Art of Shin Godzilla book. The original Godzilla script was reprinted for the 40th Anniversary Special Box (東宝 ゴジラ生誕40周年記念 特別盤). If you collect Japanese Godzilla book, you probably have several scripts already. Original Godzilla scripts go for thousands of dollars. Reprints are reasonable, accessible, and great for the collection.