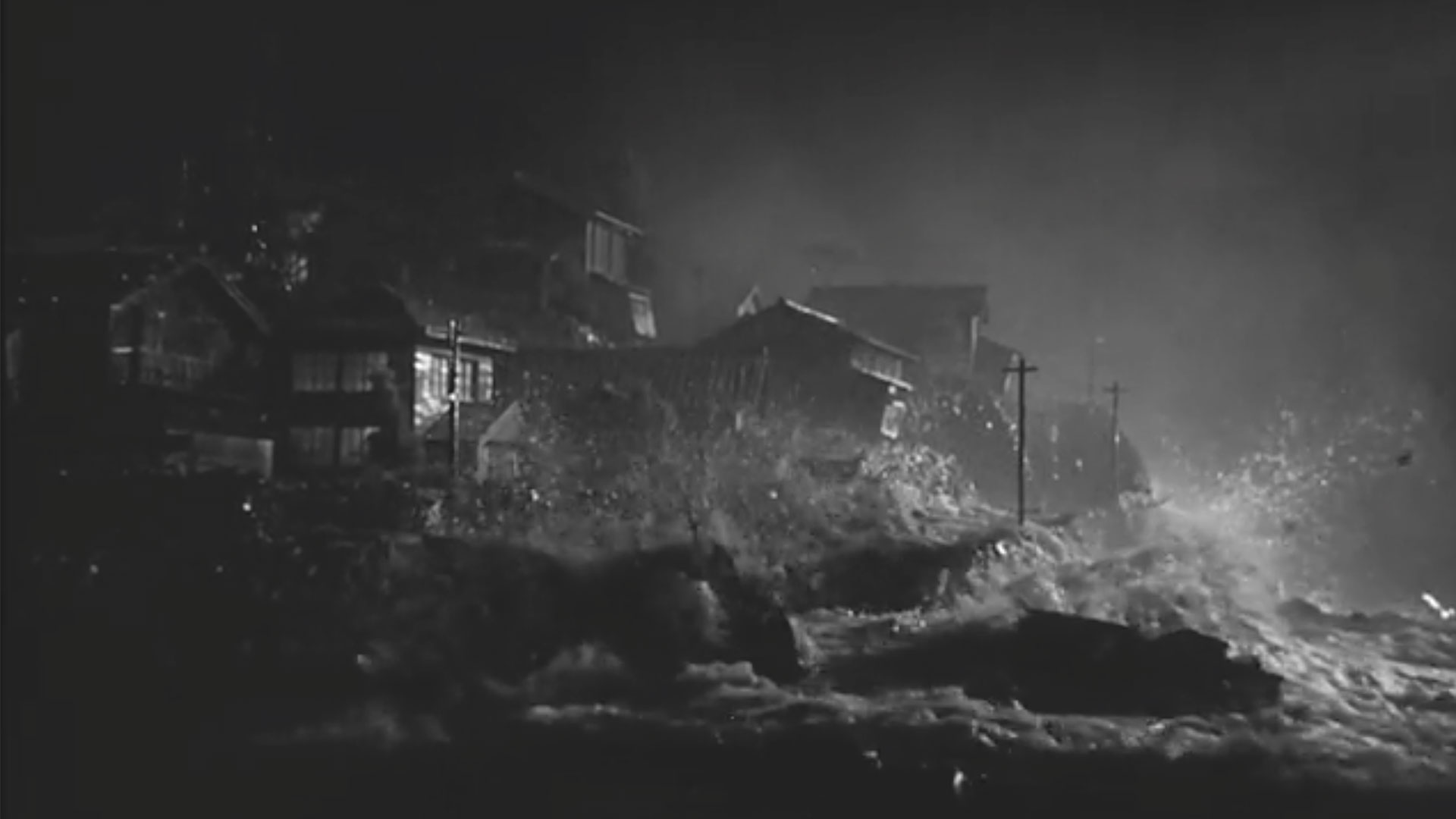 Most casual Godzilla fans make the connection between Godzilla’s origin and the atomic bombing of Hiroshima and Nagasaki at the close of World War II. Students of Gojira (1954), recognize its opening scene of the destruction of Eiko Maru akin to the story of the the Lucky Dragon No 5. The former connects Godzilla to the war and the latter to the postwar and the message of anti-nuclear proliferation. But few would know Godzilla’s connection to Typhoon Marie and Toya Maru accident in September 1954. Typhoon No. 15, named the Toya Maru Typhoon (洞爺丸台風) is listed as one of the top ten events of 1954 in Japan.1

Typhoon Marie struck Japan on September 26, 1954, and ravaged the country until it dissipated on the 29th. With wind speeds of 140 km/h (85 mph) it did a great deal of damage passing Kyushu and making its way to Hokkaido, where most of the damage occurred. A large fire, known as the Fire of Iwanai (岩内大火) broke out destroying 80% of the city (3,298 houses, 16,622 victims, 35 dead, 551 injured, 3 missing).2 But the greatest lost of life occurred at sea in the Toya Maru accident (洞爺丸事故). Toya Maru (洞爺丸) was a 118.7m-long Japanese train ferry constructed by Japanese National Railways (JNR).3 Operated by a crew of 120, she could accommodate 1,128 passengers. The Toya Maru was the flagship of the Tsugaru Strait, situated between Honshu, the largest island of Japan and Hokkaido, connecting the Sea of Japan with the Pacific Ocean. The Toya Maru covered Aomori to Hakodate in about four and half hours.

On the September 26, Typhoon Marie was moving toward Tsugaru Straits. The Toya Maru arrived in Hokkaido from Aomori and was scheduled to return later that day just before the typhoon. However, its departure was delayed due to the transfer of passengers from another vessel. The captain decided to cancel the journey, but when the weather cleared up, he proceeded, thinking the typhoon had passed. It had not, the typhoon had only slowed down and began to gain strength in the Sea of Japan. The Toya Maru with her estimated 1,300 passengers disembarked. And the the winds began to pick up. Its anchor was lowered to wait out the weather, but it failed to hold causing the ship to adrift. Taking on water in the engine room, the Toya Maru stopped and became uncontrollable. A SOS was sent out, but it was too late. Only several hundred meters off shore, the Toya Maru capsized and sunk, killing 1,159 including 73 crew. Only 150 passengers survived. After the tragic accident, the typhoon was named Toya Maru Typhoon.4

There is no doubt that 1954 Japanese moviegoers immediately made the connection between Godzilla and Typhoon No. 15 and the tragic sinking of the Toya Maru. The event was fresh in their memories as much as the Lucky Dragon No. 5 incident. They didn’t have to look far the meaning and significance of Godzilla; it was in their immediate context and experience. Godzilla was the representation of their most recent tragedies as well as those from the war. And the latest was Typhoon Toya Maru.

Shuntaro Ono (小野 俊太郎 ), in 「ゴジラの精神史」The Cultural History of Godzilla 1954, connects Godzilla to the tragedy, writing, “Another natural phenomenon that is superimposed on “Godzilla” is the typhoon. When Godzilla makes landfall, strong winds hit Odo Island, destroying houses. When the Odo Island disaster petition group went to the Diet to testify, newspaper reporter Hagiwara also said, ‘I can’t believe it was just a typhoon damage.’ It is common for the weather to change abruptly when such apparitions appear. Even the dragon as a theme is drawn together with clouds, and there is an identification with such a natural phenomenon.”5 Later he writes, “‘Godzilla” was released after the accident was reported not only in newspapers and magazines, but also on TV and newsreels.” He makes a reference to the large number of bereaved families searching for clues and crying that recalls that scene in Gojira of the families who gathered at the Japan Coast Guard operations office to find about the whereabouts of their loved ones from authorities.6 He argues that it is possible to connect such natural disasters with Godzilla.7 This is evident and intentional when Godzilla and a typhoon simultaneously make landfall on Odo Island.

1954 events and context matters. To better understanding Godzilla, we must delve into its historical context and find such connections. The impact of Toya Maru accident on Gojira (1954) should not lost to history, but figure into our discussions about the significance, meaning and representation of the King of the Monsters. We must expand the metaphor of Godzilla to include natural disasters. Godzilla is indeed a force of nature and should remind us of the tragic loss of life at sea both man-made and natural.